This is a great idea, badly put into practice, only 1.5 stars for this one. 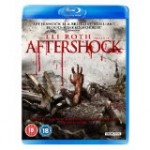 Aftershock is a disaster film, set in the very beautiful coastal town of Valparaiso, Chile. As a tourist guide and advert for Valparaiso, this is an excellent film (they apparently have a lovely funicular railway), as a B-movie, not so much.

Aftershock is written and directed by Chilean director Nicolas Lopez (Que Pena Tu Vida) and is also co-written and produced by the star, Eli Roth (Inglourious Basterds, director of Hostel). 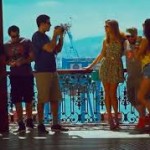 The film tells us the story of Gringo (Eli Roth), a hapless American tourist being shown the time of his life by his Chilean friends Ariel (Ariel Levy – Que Pena Tu Vida) and Pollo (Nicolas Martinez – Que Pena Tu Vida). His holiday is marred only by his lack of ability to pull the ladies, which seems to have changed when they meet three gorgeous girls, Irina (Natasha Yarovenko – Room In Rome), Kylie (Lorenza Izzo – Que Pena Tu Vida) and Monica (Andrea Osvart – Maternity Blues).

A great time is had by all, until a massive earthquake hits the town of Valparaiso, bringing it down around their ears and plunging them into a landscape of death, blood and destruction. 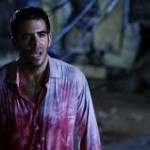 And herein lies the problem with Aftershock. Because it is so far into the film when even the initial earthquake occurs, let alone the aftershock, that by the time it does you are kind of hoping that all the people we have seen to that point will be killed immediately and replaced by someone new and interesting.

Never let anyone tell you that you can’t do too much character development – you can! Tedium aside however, when they do finally get to point of the film, the effects are pretty good, lots of blood and rubble everywhere and an entertaining scene concerning the aforementioned railway.

All in all though, Aftershock is not even close to being one of the best earthquake films that I have seen and I certainly wouldn’t recommend it. 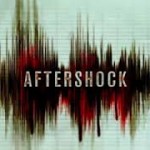 Aftershock is available to buy now on DVD and Blu-ray