1 star for this ridiculous and misleadingly described “sci-fi” film. 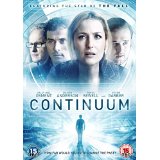 Originally titled “I’ll Follow You Down” (which is equally as irrelevant to the film as the current title), Continuum is written and directed by Richie Mehta (Siddharth, Amal) and to look at the cover, which is by the way nothing whatsoever to do with the film, it looks like quite a promising sci-fi feature. Don’t be fooled.

Continuum tells us the story of married couple Marika (Gillian Anderson – The X-Files, The Fall) and Gabriel (Rufus Sewell – A Knights Tale, Hercules), who are both scientists working at the forefront of their field. 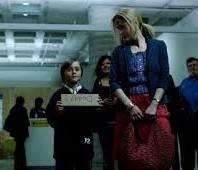 After a business trip away, Marika and their young son, Erol (John Paul Ruttan – Defendor) are at the airport, eagerly awaiting the return of Gabriel. When he doesn’t show up, Marika begins to call around and discovers that all was not as it seemed. He turned up to meet her father Sal (Victor Garber – Argo, Titanic) as planned, but then never checked out of his hotel and hasn’t been seen since.

Cut to quite a few years later. Gabriel never returned and Marika is now living with a grown up Erol who is studying science under her father and looking after her as she has extreme difficulty dealing with the loss of her husband. 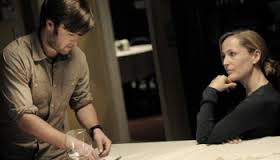 Erol is now being played by the magnificently weird looking Haley Joel Osment (A.I, The Sixth Sense) who has grown up to be every bit as strange as you would expect. Looks like his film choices haven’t improved much either.

During a talk with his grandfather, it turns out that he believes Gabriel may have been working on wormholes and accidentally opened one, traveled through it and become stuck on the other side. (I’m fairly sure that this is supposed to be the “sci-fi” element). 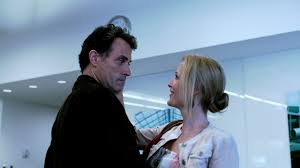 What then follows is lots of kitchen sink drama as we have to wade through all the human emotions surrounding the loss and potential rediscovery of a loved one. Erol plans to build his own machine to travel back in time and change the past so that Gabriel can return.

His girlfriend has to play the obligatory baby card, if you do this you’ll be killing our baby blah blah blah. Far too stupid to understand any basic concepts and incredibly irritating.

I think it’s important to point out to any prospective directors that just because you have seen a sci-fi film probably doesn’t mean you should attempt to make one. It’s obviously not as good an idea as you thought. And no, mentioning a wormhole and making up some random numbers is not enough to qualify it as a sci-fi film.

It’s also worth noting that adding frenetic music to a scene doesn’t make it more exciting, it has to actually be exciting for that to work.

Bearing in mind her previous record in this field I’m rather surprised that Gillian Anderson was prepared to put her name to this. Still, each to their own I suppose. If you’re into sci-fi then you’ll be exasperated by all the emotional rubbish. If you like an emotional story then I suspect that what little sci-fi there is would put you off, so I’m not really sure who this is aimed at.

Continuum is available to buy digitally and on DVD from 09th March 2015.