This is definitely what I would have expected from this genre of film, so I have given it 3 stars. 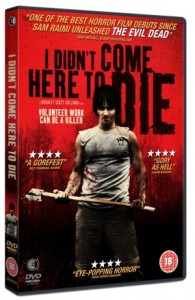 I Didn’t Come Here To Die is almost a teen horror flick (I think they may be slightly older, but that makes little difference to the story). A group of young people head off to an improbably remote location to begin setting up a summer camp for underprivileged children. Alcohol is smuggled into the campsite, too much is imbibed and a combination of clumsiness, sexual tension and paranoia lead to the inevitable gore fest.

I Didn’t Come here To Die is directed by Bradley Scott Sullivan (his directorial debut) and stars a cast of relative unknowns and newcomers.

Despite their combined lack of experience the cast actually do very well with what little they are given to work with in the way of script. It is stilted and predictable, but the acting is good and there is plenty of latex and fake blood (some quite artful grouting in places).

All in all, watching I didn’t Come Here To Die is a reasonably enjoyable experience, which leaves you with two inescapable conclusions.