Proper British genius this one, 4.5 stars. 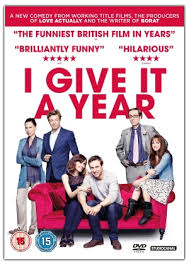 I Give It A Year is written (screenplay) and directed by Dan Mazer (Bruno, Borat) and is an extremely refreshing take on what has become a rather tedious genre, the “rom-com”.

Rather than endless dithering as to who will get together with who, will they, won’t they, this film starts with the wedding and watches it all slide downhill from there.

When struggling writer Josh (Rafe Spall – Prometheus, Sean of the Dead)  marries the ambitious Nat (Rose Byrne – 28 Weeks Later, Insidious) after a whirlwind romance, pretty much everybody doubts the wisdom of their choice and says as much at the wedding.

Things do not improve any with the arrival of Josh’s ex girlfriend Chloe (Anna Faris – Scary Movie 4, The Dictator) and Nat’s new suave client Guy (Simon Baker – The Mentalist, The Devil Wears Prada) and soon things start to get pretty awkward. 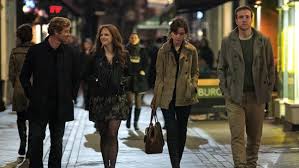 I Give It A Year is an unmistakably British comedy, black but hilarious, and features show stopping performances from Stephen Merchant as the wildly inappropriate best friend and Olivia Colman as the marriage guidance counseller. Also worth a mention are Minnie Driver, Nigel Planer and Jason Flemyng.

In spite of the strange angle, this is a thoroughly enjoyable feel good film, laugh out loud funny in quite a few places and most importantly, never tries to take itself too seriously or be something it isn’t.

I would strongly recommend this film, settle in front of the TV with a bottle of wine and a bag of popcorn, perfect for a girly night in!