I was very disappointed in this film, only 2 stars I’m afraid. 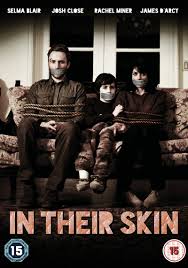 It really is a shame because the premise of In Their Skin is great and I was looking forward to watching it.

The story centres around the Hughes family, Mary, Mark and Brendon, who go away to a secluded holiday cottage to get away from their everyday lives after the death of their daughter in a tragic accident.

Shortly after their arrival they meet the neighbours, a worryingly similar family, who ask way too many questions and who soon become very difficult to get rid of. They want what they view as the perfect life, to get it they simply pick a family and become them.

I have seen this billed as a horror/thriller but unfortunately, despite a great idea and some really good acting performances In Their Skin is ultimately neither of those things.

The brooding, slow paced style of the film would be far better suited to a different genre, it feels as if you are always waiting for it to get going – maybe someone will grow a pair soon, so it can all kick off – but it never really does.

The beginning of the film implies clever twists to come but never delivers, altogether a pretty frustrating experience.

In Their Skin is directed by Jeremy Power Regimbal (Marilyn), whose seeming lack of experience is very apparent here. The overriding message of the film, we’re middle class feel sorry for us, immediately makes you think “Well, if they’re already this miserable, where is the fun in terrorizing them?”

All that being said, the acting is really very good, the stars of the film all act Out of their skin (pun intended).

The best performance of all has to be from Rachel Miner (Supernatural, Penny dreadful), who does an amazing job of mimicking every move made by Selma Blair (Hellboy, Cruel Intentions). Also starring are Joshua Close (The Master, Isolation), who also wrote the film, James D’Arcy (Hitchcock, Cloud Atlas), Quinn Lord (The Hole, Imaginaerum) and Alex Ferris (Diary Of A Wimpy Kid, X-Men: The Last Stand).

In Their Skin is available to buy now on DVD.