5 stars for this delicate and heartbreaking love story. 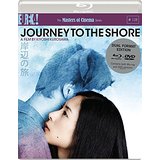 Journey To The Shore is released as part of Eureka Entertainment‘s Masters of Cinema Series, No. 138. Directed by Kiyoshi Kurosawa (Tokyo Sonata, Pulse), it was the winner of the Un Certain Regard Best Director award at Cannes and is based on the novel by Kazumi Yumoto.

It features two of Japan’s biggest stars, Eri Fukatsu (Parasyte: Part 1, A Ghost of a Chance) and Tadanobu Asano (Thor, Ichi the Killer).

It is set in a world slightly different to our own, where the spirits of the dead may still reside in the world of the living for a time before moving on. So it is that when Mizuki’s husband, Yusuke, turns up one evening, even though he has been dead for three years, she isn’t greatly surprised to see him.

He tells her of his death at sea, that his original body was eaten by crabs, and explains that he would like them to go on a journey together. He wants to spend the time he has remaining with her, and introduce her to all the people who have helped him since his death.

Together, travelling only by bus, they set off to visit the people and places that have formed his half-life since the day he left her. All are welcoming, inviting them to stay with them and making them feel at home and Mizuki begins to get a feel of how popular her husband was. 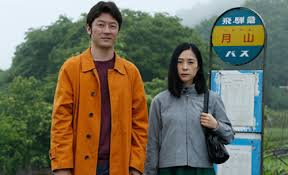 Some of the people they meet are like Yusuke, in between worlds, some are human and some don’t yet realise they have died. Together, they must all find a way to get through the challenges which await them.

Journey to the Shore is a truly amazing film, both hauntingly beautiful and pretty devastating all at the same time. The matter of fact way in which the characters deal with their own understandings of life and death is fascinating, but also slightly difficult to watch. 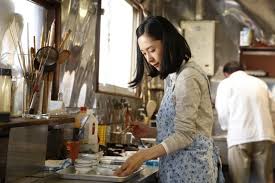 The director’s intent was to bring the concept of “mitoru” to the screen. This is a Japanese term meaning to accompany someone in their dying moments and is traditionally at the bedside, but here artistic licence allows them to do it out in the world.

It is a great film, well worth adding to your collection, but be warned, you will need a box of tissues handy as things all get rather emotional.

“I was always being told to listen to my own sound, to concentrate on that sound and listen to it carefully and that, however much I hated it, my sound was myself.”

Journey to the Shore is available to buy now on Dual Format DVD and Blu-ray.