3.5 stars for this nicely tweaked version of an Eighties cult classic. 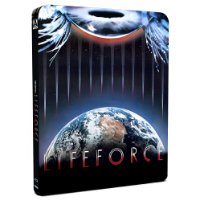 Lifeforce was first released in 1986 and was directed by Tobe Hooper (Poltergeist, Texas Chainsaw Massacre) and based upon the novel “The Space Vampires”, written by Colin Wilson (Max Headroom).

This sci-fi thriller starts when the deep space probe Churchill investigates Halley’s Comet and finds an unidentified object located within the head of the comet. 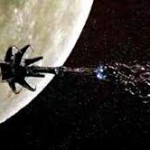 This proves to be a ship of alien origin, on first inspection filled with giant bats, but also containing three life pods containing naked humanoids, one female (Mathilda May – Naked Tango, The Tit And The Moon), and two males.

The captain of the ship, Col. Tom Carlson (Steve Railsback – Ed Gein, Disturbing Behaviour), elects to bring the bodies back to Earth for further investigation.

As the unfortunate probe is recovered by the space shuttle Columbia, burned out and floating dead in space, the life pods are returned to the European Space Research Centre in London, where a chain of events is begun which will lead to the infestation of London by Naked Space Vampires. 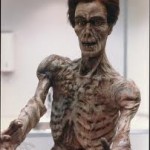 There are plenty of good, not to mention memorable performances here, not least Peter Firth (The Hunt For Red October, Spooks) and Patrick Stewart (Star Trek, X-Men).

This Blu-ray release features the original theatrical version, for die-hard fans, and a beautiful restoration of the film, overseen by Tobe Hooper. The sound has been tidied up very nicely and the picture has been much improved, with much more detail visible than in previous releases.

If you remember the original film then you will love this, lots of new stuff available, and loads of work has been done. If not, well you just might like it anyway (there are still plenty of titties).