0.1 stars for this appalling shower of sharks. 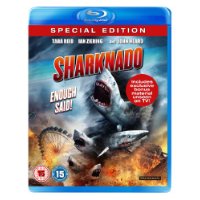 Sharknado is a great title for a film, there is no denying that. So it does come as rather a surprise that armed with such a good idea, they managed to produce a film which has no visible redeeming features (other than the title, that is).

Sharknado is directed by Anthony C. Ferrante (Boo, Scream Of The Banshee) and written by Thunder Levin (American Warships, AE: Apocalypse Earth). With a pedigree like that, I was expecting great things.

The premise is fairly obvious here. There is a large tornado at sea, which picks up large quantities of sharks (no other types of creatures interestingly, no-one being menaced by tuna or octopi, perhaps we could have a sequel, Molluscnado, with the tag line “Just Clam up.“) 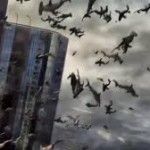 There are a few names in this film, including Ian Ziering (Beverly Hills 90210, Guiding Light), Tara Reid (The Big Lebowski, American Pie), John Heard (Big, Awakenings) and Cassie Scerbo (Make It Or Break It, Teen Spirit). The fact that maybe they were expensive to hire perhaps goes some way towards accounting for the overwhelming impression that the actual special effects budget was somewhere in the region of 50p and a Mars bar.

What was presumably supposed to be the tornado looks, at best, like some sort of indeterminate weather event and the sharks are just shocking. There is no definition to them and half the time they look as though they are made of jelly.

Sharknado is best enjoyed as a concept in your own head, anything and everything you can come up with yourself based on this title is almost certainly going to be better than whatever they managed.

And why, oh why, did it not occur to anybody to just go “Look, it’s raining sharks, shall we go inside?” Pah! 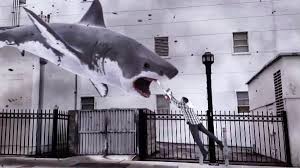 Sharknado is available to buy on DVD and Blu-ray from 7th October 2013.