In the spirit of generosity I have given this film 1 star. 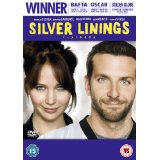 For a film which actually won awards, it is almost impossible to find any redeeming features here.

This film is based on the debut novel by Matthew Quick and directed by David O. Russell (Three kings, The Fighter).

The story-line is almost mind mindbogglingly tedious. Although you can just about tell where they are going with it, the overwhelming question is always “Why?”. Closely followed by “Is this still going?”.

Silver Linings Playbook is billed as a comedy/drama/romance. Comedy? I laughed a couple of time during the last 20 minutes . Drama? Plenty, but even at it’s height it is over done, pointless and for the most part quite embarrassing to watch. Romance? Err, again maybe the last 20 mins but not really worth the wait.

I would love to ask somebody who thought that trying to make a cross between One Flew Over The Cuckoos Nest and Dirty Dancing would be a good idea. Because as far as I can see the end result misses the mark on most of the things it appears to have been trying to achieve.

There are plenty of names in this film, Bradley Cooper (The Hangover, Limitless), Jennifer Lawrence (The Hunger Games, Winter’s Bone) and Robert De Niro (Goodfellas, Meet The Parents) but even they can’t save this clumsy disjointed affair.

I don’t imagine anyone involved in the film will like this review, but they can take solace in the fact that reading it won’t waste as much of their time as watching the film wasted of mine.

Silver Linings Playbook is available to buy now on DVD and Blu-ray.