This is a lesson on where less is far more, casting, writing and acting perfect. 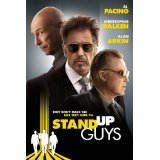 Brilliantly directed by Fisher Stevens, (Just a Kiss) and a witty and gritty pen from Noah Haidle, (Gym Short). Despite their inexperience at the sharp end of the business they have produced a cracking film that warms the heart of true friendship.

Val, (Al Pacino, Scarface) has spent 28 years behind bars for a heist that went wrong.

His long time friend and accomplice Doc, (Christopher Walken, Man on Fire) is waiting for him when he gets out. With thoughts of good food Doc takes Val to his favourite diner where an friendly and attentive waitress Alex,(Addison Timlin, Afterschool) serves them. 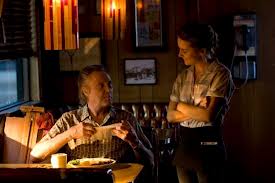 Doc has been coming to the diner every day for ages and it shows in the bond he has with Alex, she accepts Val readily and doesn’t even blink at his huge order.

Doc takes Val back to his flat which Val is not enamoured with, we now see Docs passion for painting sunrises as all the walls are adorned with images of the city at dawn.

Val knows that the local crime lord Claphands, (Mark Margolis, Black Swan) bears a very large grudge against him as his son had died in that fateful heist. Val knows it was the son fault that cost him his life but knowing Claphands he knows there is a bullet with his name on it, but who will pull the trigger? 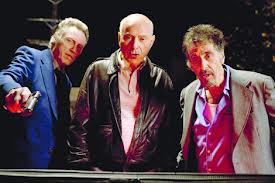 So with the knowledge that his time is limited they decide to put the old team together one more time.

They breakout their old wheelman Hirsch, (Alan Arkin, Argo) a quiet man with a lot of talent behind the wheel.

After stealing a local thugs wheels they take it for a spin and reminisce and Hirsch makes the day for the girls back at the brothel.

How will the morning end that is the question all the way through the film and when the time arrives you won’t be left wanting.

An Excellent film that should fill a space in your DVD collection.

Available to Buy on DVD and Blu-ray on the 28th Oct.