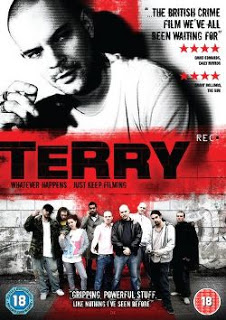 This is Nick Neverns first foray into directing, and he has jumped in with both feet as the star and the writer.

This is a real-life film with a script that could have come off any street corner or any boozer on a Friday or Saturday night. I was slightly confused at the start as the star Terry (Nick Nevern) looks straight at the camera and talks to the camera man, its only takes few seconds before you realise that the camera man is in the room with Terry and his mate Spencer (Ian Duck) before they are all legging it out of a house.

Filmed in the Naive style of an arts student making a documentary on the life of Terry, whom takes us on a tour of his London haunts and hang outs, some of his friends love the camera, others do not with severe consequences for Charlie.
The film is mainly centred around Terry and Spencers relationship and the trouble they manage to find, but this leads to terry becoming paranoid, and the unflinching patience of Charlie Reuz (Manuel Atkinson) the cameraman is remarkable.

This is a cracking film that’s well acted by the central characters and the script is brilliant, a true to life gritty film, that makes you look forward to Nicks future ventures.

5 stars, get a few tinnies a few mates and enjoy a tour of London’s night spots with Terry and Spencer, with Charlie in tow.

Buy it from Amazon