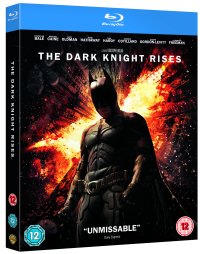 The Dark Knight Rises is a brilliant film, totally worthy of 5 stars. This is the 3rd and final instalment in the Dark Knight series, starring Christian Bale (Batman Begins, The Dark Knight). I would definitely suggest that you watch the first two films before you see this one, to make sure you get the full effect.

In this final film, we see Bruce Wayne begin in a city which no longer needs him, and tracks his struggle to come to terms with his new situation.

As ever, the story is well thought out and well written, and the script allows the many stars in this film to really get their teeth into the roles.

The Dark Knight Trilogy has been directed by Christopher Nolan (Inception) and included on the disc is a short feature by him ; The Journey of Bruce Wayne.

This is one to watch, I would recommend it to everybody. What more can I say? Go out and buy it!

The Dark Knight Rises is released on Blu-ray, DVD and Digital Download from 3rd December