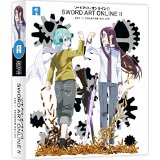 4 Star the Return of Kirito

SAOII adapts the fifth through seventh volumes of the light novel series written by Reki Kawahara (Accel World). This series takes Kirito back into the world of VRMMORPG. After all the traumatic deaths in Alfheim, some of those at his own hand, is he ready to go back in.

Nearly a year after coming out of hospital Kirito is getting on with his lfe, while the rest of Japan is hooked on the new MMO game Gun Gale Online (GGO) a total immersion game where it’s player against player and their surroundings, with professional players earning credits and converting them into real cash whilst and only in the game. The game originates in the USA, very little is known about the company and Japan has its own server.

But it seems that GGO has a dark side. As people watch an interview with the top ranked professional players a man pulls out a gun, claiming its name is “Death Gun” and that he will kill all the top ranked players. He then aims his gun at Zexceed, one of the interviewees and fires, causing the target to shudder and disconnect from the studio. Nobody thinks any more

of it, until a month later Kazuto Kirigaya (Kirito) is contacted by Kikuoka Seijiro of the Ministry of Internal Affairs’ Virtual Division, with whom Kirigaya worked with during the SAO incident. He reveals that the body of Zexceed’s user has been found and that he had died from an acute heart attack, as have other top players.

Can a bullet in the real world kill a virtual avatar online? Kirito is tasked with finding out more, despite his doubts that it is possible and the his belief that “Death Gun” is most probably just an urban myth. So he agrees to go in but he will leave his body in the care of Aki Natsuki, the nurse that cared for him after SAO.

When he enters GGO he finds out that he is wearing a very rare female Avatar. He has to try to find a weapons shop and the place to register for the BoB (Bullet of Bullets) competition. He asks a pretty girl known as Sinon, a top sniper who, seeing another girl gladly helps him. She finds it strange that a newby would want to enter the BoB. But she helps him/her out. She is amazed when he shows his skill trying to earn money to buy equipment.

A great addition to the SAO family and this is just part 1 of four. Come see how Kirito handles the world of guns and lots and lots of bullets, and girls that bear a grudge. 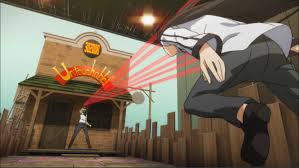