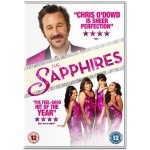 This is a really enjoyable film  and I have given it 4 stars.

The Sapphires is an Australian film, set in 1968, against the backdrop of the Vietnam war.
The film is based on the stage play of the same name, written by Tony Briggs in 2004 and based on the real life experiences of his mother (Laurel Robinson) and his Aunt (Lois…more