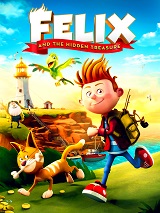 Felix and the Hidden Treasure is a Canadian children’s film written and directed by Nicola Lemay. Originally called Felix and the Treasure of Morgaa, it is his feature directorial debut. It is now showing in cinemas across the UK.

“This is the first time in two years that my mother has left the house. You promised we’d go to the island as soon as we had the chance.” 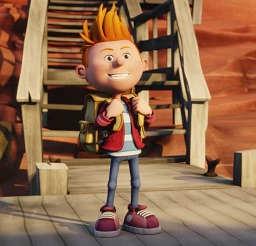 Felix (Daniel Brochu – Mr. Nobody, Arthur) is a twelve year old boy living on a small island with his mother Marlene (Holly Gauthier-Frankel – Assassins Creed) and baby sister Mia. Two years previously, his father Jack (Marcel Jeannin – Taking Lives) was lost at sea and ever since Marlene has been taking care of the family on her own.

She has finally decided on some me time and has booked herself on a tropical cruise. The plan is for her sister Annie (Angela Galuppo – The Trotsky) to look after Mia and the house, while Felix goes to Montreal with his best friend Max (Wyatt Bowen – I’m Not There) and his parents. 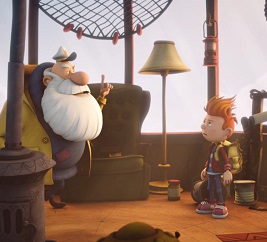 Felix has other ideas however, he firmly believes his father is still alive out there somewhere. As soon as Marlene leaves he heads off to see Tom (Vlasta Vrana – Human Trafficking), an old fisherman who has said that he may take him to search for his father. He refuses, but when Felix attempts the journey on his own, he rescues him and decides to take him after all.

Felix and Tom, accompanied by Rover the cat who thinks he’s a dog, and Squawk a thieving parrot, head off to Dark Shadow Island for a rip roaring adventure to uncover the many secrets it holds. 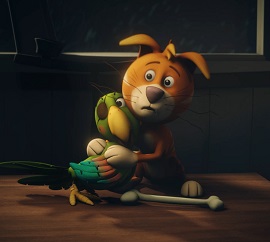 Felix and the Hidden Treasure is a delight to watch. It’s a really interesting story and beautifully animated with well rounded characters, a decent script and good voice acting.

There are also lots of comedy moments involving Rover, the cat who thinks he’s a dog and Squawk the mischievous parrot. Colourful and action packed, this film is sure to appeal to kids of any age and well worth a long awaited trip to the cinema.

“If he were out there, don’t you think someone would have spotted him by now”