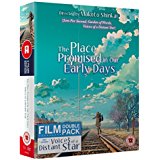 This is a double feature set, including both The Place Promised in Our Early Days and Voices of a Distant Star. These are the second and third films by renowned Japanese director Makoto Shinkai (The Children Who Chase Lost Voices, Garden of Words) and also included is “She and Her Cat”, an adorable 5 minute short, which was his first animation.

“I always have a premonition of losing something. That’s what she said to me.” 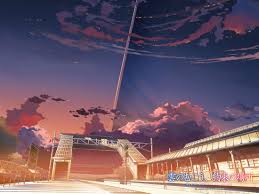 The Place Promised in Our Early Days tells the story of three school friends, living in a divided Japan. Following a war, the island of Hokkaido was occupied by the “Union”, who proceeded to build a mysterious tower, visible to the children of Aomori, who are fascinated as to it’s purpose.

who have become firm friends with Sayuri (Jessica Boone – Samurai Bride), a young girl from their class. The three friends dream of going to the tower together.

The boys have found themselves a downed Maritime Self Defence Force Drone, which they have called the Bella Ciella.

They plan to get it up and running and fly over to the tower to find out what it is. To earn the money they need for this highly illegal endeavour, the two boys are working for Okabe (John Swasey – Fate/Kaleid Liner Prisma Illya) at the local military plant.

All these plans are put on hold however, when Sayuri mysteriously disappears over summer break and the boys go their separate ways to deal with the grief as they see fit. Will they ever discover the purpose of the tower, or the whereabouts of Sayuri? 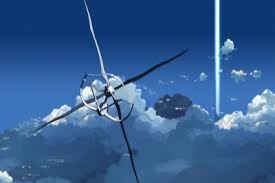 There are unexpected but very welcome sci-fi elements to this film and of course more than a few tears. A glorious tale of childhood dreams, perceived betrayal and a promise made on a hazy sunny afternoon which must be kept at any cost. 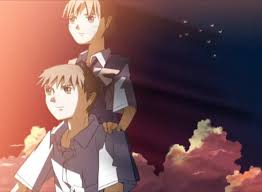 Voices of a Distant Star is a short film, 25 mins long, which tells the story of two childhood friends, Noboru (Adam Conlon – Elfen Lied) and Mikako (Cynthia Martinez – Penguindrum), who are separated when Mikako enlists in the army. Heading ever further from Earth, she regularly texts Noboru, but the time between messages grows longer and longer, eventually running into years. A lovely tale and with the upcoming release of Your Name, an interesting insight into the early work of a talented director.

A must own for any fan of Makoto Shinkai and a great place to start if you are unfamiliar with his work.

“The tower that was beyond the clouds that I admired became an important promised place to me. I think there was nothing for us to fear at that moment.”

The Place Promised in Our Early Days / Voices of a Distant Star Twin Pack is available to buy now on Blu-ray.