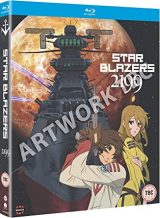 The Fight for Survival.

Director Akihiro Enomoto (Fafner in the Azure: Dead Aggressor) gets his first full series directorial debut with this slick human species survival race, a cool story that has good character building combined with great CGI animation space battle and thousands of participants to bring the full tension and enormity of the human plight.

By the 22nd century

man has moved into space, inhabiting Mars and sending probes out into the black, but everything out there isn’t always friendly, or at the same stage of space development, such as the inhabitants of the ailing planet Gamilas. They have ventured into our solar system and have colonized part of Pluto, but they have set their sights on the blue marble situated third planet from S

ol. They do not like the blue planet as the atmosphere is not to their liking, and they set about making it to their requirements. They do this by firing planet bombs Gamilas made and re-directing large asteroids at Earth’s surface killing billions and sending the human race underground.

But there is a ray of hope from far, far away in the Large Magellanic Cloud,

some 158,200 light years away. May as well have said nothing that far away, but no the Ishcandarians are going to send an envoy with a device (Wave Motion Activation Core) a power source that will make it possible for a space ship to travel the immense distance and back all within a year.

The reason to make this journey, the Cosmo Reverser, a device that will turn the Earth back to its former lush blue planet.

Gamilans, a decoy battle so that the incoming Ishcandarian ship can make a delivery on Mars. Charged with making the collection is Susumu and Daisuke. As the UN space fleet gets decimated by Gamilans the Ishcandarian ship crashes to Mars and Susumu and Daisuke find the Ishcandarin escape pod, the occupant didn’t survive the crash. However, the pair retrieve the device and make it back to earth where they see the centuries old ship Yamato buried in the desolate desert that is now Earth.

This old wreck hides a great secret. It is mankind’s great hope once the Wave Motion Activation Core is engaged into the drive system. The ship need a huge a huge amount of power to get going, but with a planet bomb heading straight for them they have to get under way and once sky bound they get to test the new firepower of the refurbished Yamato.

The journey to Ishcandar is now on and the Earth only has 365 days before the human race is no more.

out for the Yamato. Will this crew of young recruits headed by Captain Okita make it through enemy territory and survive a whole year out in the unexplored blackness of space.

Star Blazers: Space Battleship Yamato 2199: The Complete Series is a great way to get into the theatre of space opera, with many stories of the crew, space battles, new lifeforms and ancient technologies all awaiting to be discovered by the crew of the Yamato. 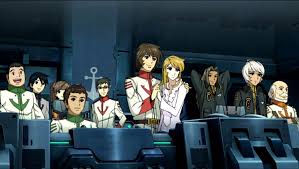