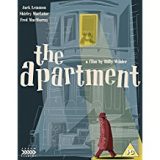 A Magic Moment in Movie History.

A master piece, from writer/ director Billy Wilder (Some Like it Hot, Sunset Boulevard, The Private Life of Sherlock Holmes, The Spirit of St. Louis) and now brought up to Blu-ray quality with a ton of special features for this limited release (3000), all thanks to Arrrow Academy.

Calvin Clifford (C. C.) “Bud” Baxter (Jack Lemmon, Some Like it Hot, 12 Angry Men, The China Syndrome) is a tiny speck in the corporate world of insurance, his prospects are low but he has ambitions.

He lives on his own in an apartment in Upper West Side New York which is why his bosses keep an eye on him as they are all involved in extramarital liaisons, which are so noisy that his neighbours assume that Bud is a playboy. His

managers are Joe Dobisch (Ray Walston, The Sting),
Al Kirkeby (David Lewis, Mean Dog Blues), Mr. Vanderhoff  (Willard Waterman, The Swinging Set) and
Mr. Eichelberger (David White, Brewster’s Millions) and they like nothing better than living it up in “Buddy’s apartment. It is when they give him a

glowing report to the big boss Jeff D. Sheldrake (Fred MacMurray, Double Indemnity) that things start to get complicated for C. C. as Sheldrake want exclusive use of his apartment for the promotion he so desperately wants.

As a sort of compensation for wanting to use the apartment that same night he gives Bud two tickets for the hit musical The Music Man. Bud cannot think of

anyone better to take along to the show than Fran Kubelik (Shirley MacLaine, Terms of Endearment, Postcards from the Edge, Steel Magnolias), an elevator operator on whom he has had his eye for a while.

They agree to meet at the theatre after she has had a drink with an old flame of hers. But what Bud doesn’t know is that she is meeting Sheldrake and he is promising to leave his wife for her. (Yeah Right).

What ensues is a Romantic Comedy that you will remember forever. Awesome.

The Apartment is available on Limited Edition Blu-ray.