Written and directed by Jake Paltrow (The Good Night), he brings us a tale of the near future where the world has become a dust-bowl and finding water is now the priority and the greatest commodity in the U.S. where our family live. Set with three acts, one based on each of the main characters.

Ernest Holm (Michael Shannon, Man of Steel)  has a farmstead that was at one time rich and fertile, but now like everywhere around him there is only the bright golden hue of sand. In the middle of that land is his very securely locked well that

is just too much of a lure for anyone around and justice is swift and dealt with on site. Along side him but never allowed to do anything is his son  Jerome (Kodi Smit-McPhee, Dawn of the Planet of the Apes) who always refers to his father by his christian name. You can see the resentment in the young man’s eyes as they take supplies to the remote deep water well which supplies commercial farms with water. Ernest tries to persuade the miners leader Caleb Moore (Robert

Hobbs, Chappie) to divert some water to his farm but he hits a brick wall with that, even supplying them with the daemon drink.

Even though Ernest’s farm is barren, someone has his eye on his property and his daughter Mary (Elle Fanning, Maleficent) betrays her 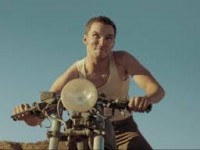 father’s trust and spends the night with the man who wants what Ernest has. He is Flem Lever (Nicholas Hoult, Jack the Giant Slayer), he wants the trade job and even bids against Ernest on a robotic donkey when real donkey breaks its leg on the treacherous path to the wells.

When on a run to the wells Ernest has a mishap and he is found by the miners attached to the robotic donkey. This gives Flem the opportunity he has been dreaming of. He moves in with his new wife Mary. He is man with varied talents and he soon has the farm on a better footing.

You always get the feeling you are in the arid region as the sun blazes down and the washed out colours of everything that rises out of the ground. A very good example of how to tell a story. Keep an eye out for Kodi Smit-McPhee as we think he will go far.