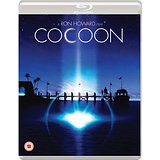 Following his success with Splash (1984) director Ron Howard (Willow, Backdraft, Apollo 13, Rush) brings us the tale of what would you do if you could live forever.

Sunny Shores Villas St. Petersburg USA is a retirement complex where people while away their days playing coits and doing dance exercise.

But friends Art (Don Ameche, Trading Places) Ben (Wilford Brimley, The Thing) and Joe (Hume Cronyn, Batteries not Included) have a better imagination and spend their time creeping to the empty house next door to use the pool-room

A swim and a chance to smoke a cigar and chew the fat, whilst enjoying being away from the complex, even if the water isn’t heated. 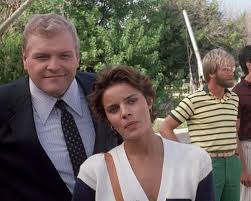 of monetary problems with the harbour master. Dollarless Jack wonders how he is going to survive when out of the blue a group of people say they want to hire his boat for twenty-seven days straight, Jack cannot believe his luck as Walter (Brian Dennehy, First Blood, Romeo + Juliet), Kitty (Tahnee Welch, Night Train to Venice) and the other two scrutinise his boat, but thankfully it passes and they are good to go.

The guys head over to the pool-house but are stopped in their tracks as they spot Walter and Kitty renting the house for a short period and they want the pool left as it is.

egg shaped objects in to the pool.

The urge and curiosity cannot keep the guys away and they decide that it can’t do any harm just having a swim in a pool. What they find is that the pool is now heated and the water feels real good, so good that these guys feel great. So great that it changes their lives.

This is feel good Sci-Fi at its best as we discover the real reason why Walter and Kitty are here, for those that have seen this before and love it this is what you have been waiting for and those that are still to discover this film you are in for a treat. Also great supporting roles by Jessica Tandy (Driving Miss Daisy), Jack Gilford (Catch-22), Maureen Stapleton (The Money Pit), Gwen Verdon (Damn Yankees).

Joe: Maybe they could give us permission to use the pool. We could pay them something.

Art: It wouldn’t be fun if we had permission.

·         Optional English subtitles for the deaf and hard of hearing