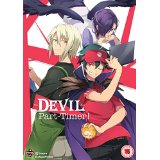 The Devil Is A Part Timer! is based on a Japanese light novel by Satoshi Wagahara and tells the story of King Satan, a Demon commander who has reigned over Ente Isla with an iron fist, bringing nothing but death and destruction to the people of that world.

However, it all becomes too much for the humans and a hero, Emilia Justina,  is selected to take him on. Just as they are getting close to defeating him, King Satan and his general Alciel manage to escape through a portal, however it dumps them in the middle of modern day Tokyo. 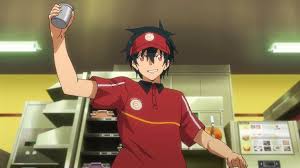 This is not an ideal situation for them, given that no-one on Earth really believes in magic and as a consequence, there is very little available for them to replenish their supplies, or to maintain their demon forms. 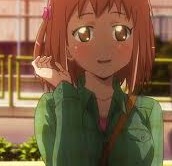 With insufficient power to open a portal back to Ente Isla, they are forced to remain in Tokyo, rent a property and get jobs in order to pay the rent. Satan changes his name to Maou Sadao and gets a job at the local MgRonald where he meets the lovely and slightly crazy Chiho, who has a massive crush on him to which he is completely oblivious. Alciel stays home to keep house and obsessively control the budget and their unexpected house guest Urushihara. 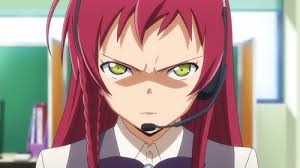 Shortly after their arrival, others begin to follow from Ente Isla, all intending mischief of one kind or another. Emilia is now known as Emi Yusa and works in a local call centre and wants nothing better than to cause trouble for her arch nemesis, if she can find any magic.

The sudden increase in earthquakes in the local area and the fact that Chiho is hearing voices seem to point to the fact that even more are coming from Ente Isla, which can only mean trouble for Maou and Alciel and to make matters worse, he finds it hard to make ends meet on basic wage and is determined to get a promotion to shift manager if it kills him. 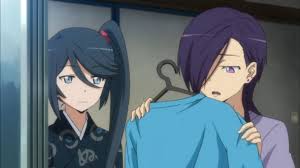 Fighting against numerous enemies from back home and, even more menacingly, a rival fast food chain called Sentucky Fried Chicken, our friend King Satan is in for a rough ride.

There is a lot of humour in The Devil Is A Part Timer!, the characters are really well written and it is extremely funny watching how each of them deal with the loss of their powers and the need to attempt to live as humans (some do fare better than others).

In spite of the comedy, there are a few serious moments here and there. It is also quite an interesting way to look at the human condition and it is every bit as clever as it is ridiculous.

Brilliant series, I would thoroughly recommend this and I really can’t wait for series 2! 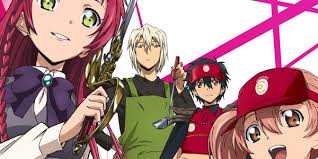 The Devil Is A Part Timer! is available to buy now on DVD and Blu-ray