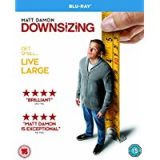 “The cause of all the catastrophes we are seeing today is overpopulation. We are proud to unveil the only practical remedy to humanity’s greatest problem. Are you ready, doctor?” 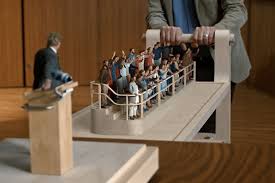 Downsizing is set in the near future, as mankind are beginning to realize that they will soon run out of both space and resources. Dr. Jørgen Asbjørnsen ( Rolf Lassgård – After the Wedding, A Man called Ove) has come up with a potential solution to this problem, to miniaturise humans, thus greatly reducing their impact on the environment.

When his experiments finally prove successful, he is in a position to start changing the world and begins to set up tiny colonies for people 5 inches tall across the globe. Aspects of the “big” world are re-designed to accommodate them and people are encouraged to give up their normal lives and join them. 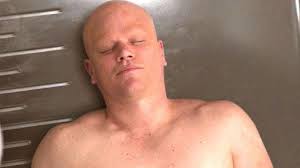 Paul Safranek (Matt Damon – Interstellar, The Martian) is an occupational therapist with severe financial problems. After meeting an old friend Dave (Jason Sudeikis – We’re the Millers, Horrible Bosses) at a reunion, and seeing how successfully he is living following the miniaturisation process, Paul and his wife Audrey (Kristen Wiig – Bridesmaids, Paul) take the massive decision to shrink themselves too. 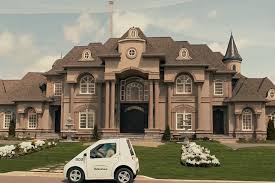 Keen to move into their palace of a home in Leisureland, a community for the small, hey head off to their new life. However, a series of unforeseen events lead Paul to question the wisdom of his decision, at least until he meets his shady neighbour Dusan (Christoph Waltz – Big Eyes, Spectre) who shows him how to enjoy being small. Here he also meets Vietnamese activist Ngoc Lan Tran (Hong 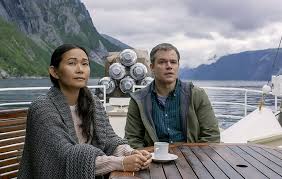 Chau – Inherent Vice), who helps him on his journey of self discovery.

Downsizing is an interesting film. Although it is implied by the trailer, it is most certainly not a comedy, there are a few comedic elements at the start of the film but by half way through even these have been abandoned in favour of something else.

It seems somewhat lacking in purpose, not quite sure what it wants to be. We start with an am using idea, shrinking people, but it soon gets bogged down with it’s own messages, too much politics and environmental commentary to be carried by this type of film.

They also offer very little contrast between the big world and the small settings and as a consequence you soon forget about that aspect of it. It would have been better to see some of the struggles which must be inherent in living small.

It is a very good watch but I can’t help but feel that anyone coming to it as a result of the trailer will be pretty disappointed, as interesting as it is, it doesn’t provide the fun factor that was offered.

“Downsizing is about saving yourself. We live like kings. We got the best houses, the best restaurants. Cheesecake factory, we got three of them.”

Downsizing is available to buy now on DVD and Blu-ray.