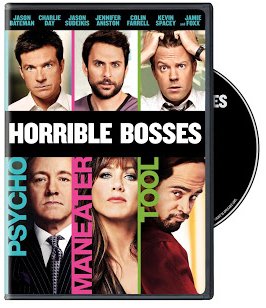 Horrible bosses is an excellent film and I have given it 4.5 stars.

This film is a highly entertaining comedy, laugh out loud funny all the way from start to finish. It is quite adult humour, very dark in places, but no less enjoyable for it.

The basic premise of the film is quite simple, three friends have bosses they hate but find themselves unable to quit their jobs, so they formulate a plan to kill each others bosses, thus solving the problem. However, as you can imagine this is not a simple as it appears.

Horrible bosses is directed by Seth Gordon (The King of Kong) and has a fantastic script and story-line, assisted by brilliant performances by all of the actors involved. This film contains plenty of big names, Jason Bateman (Juno, Arrested Development), Charlie Day (Going the Distance) and Jason Sudeikis (What Happens in Vegas, Hall Pass) as the three friends and Kevin Spacey (Usual suspects, K-PAX), Jennifer Anniston (Friends, Bruce Almighty) and Colin Farrell (In Bruges) as their respective bosses.

The only slight disappointment with this package would be the total lack of any kind of special features, however the film is good enough to make up for it.

Horrible bosses is well worth a watch, (several times probably, as I missed quite a bit of it the first time through laughing) and is ideal for a night in, in front of the telly. Highly recommended.

Horrible Bosses is available to buy now on DVD