4 Stars for the Family that is the Fairy tail Guild 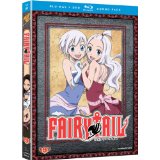 This is the first instalment of the Tenrou Island arc and covers episodes 97-108 from the master that is Hiro Mashima. All things are back to normal as Fairy Tail are back on Earth, Faust has been banished from his kingdom and the Exceeds are now looking for their eggs and offspring that were sent to Earth Land three years ago. All the damage that was done to Fairy Tails home town has all been rectified and now that Lisanna is back from the dead (ish) it is party time and Fairy Tail Guild knows how to throw a party, so much so that a new Magic Council has been formed to look at the mess that Fairy Tail has caused.

Everybody is happy and very active as all the members are out doing missions as Cana mopes about feeling miserable and it soon becomes apparent why.

It’s S-Class Mage Promotion time and everybody is excited beyond belief apart from the aforementioned Cana who says to the unfortunate Lucy that she has failed the S-class trials 4 times already and she cannot take another failure, which she says she will leave Fairy Tail Guild forever. 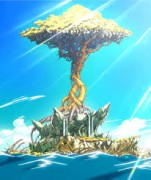 Markov chooses eight of the Fairy Tail members to take part in the trial which will be taken upon the sacred island of Tenrou Island, an island that is the last resting place of the First Fairy Tail Master Mavis. An island that is supposed to be impossible to find and the weather system in the area means that the weather is always boiling hot.

After a week of the eight choosing a partner to aid them in becoming an S-Class Mage, they head towards the island. Markov gives them their challenge, but getting off the boat is their first hurdle to overcome as mages will be competitive mages. A set of routes through the forest have been marked out, some will lead to fights with rivals and others may lead you to a confrontation with one of the S-Class Mages (Not recommended).

All mages are eager to gain the only spot within the elite S-Class and they go all out to defeat each other as they come across their opponents. But throw in a mysterious partner, suspicious Edolas’s and the dark path of magic you have a great mix of fun and danger.

This is a great start to a new saga in the environment of the Fairy Tail world. 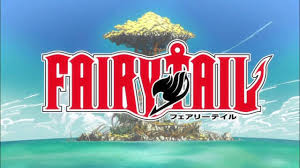