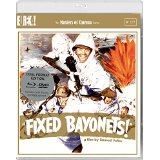 Eureka brings us #127 in their Masters of Cinema collection, this classic war film set at the start of 1951 in the Korean War is the stark tale of fear whether it be bullets, the freezing cold, or inner demons.

Writer/ director Samuel Fuller (40 Guns) uses his own experiences from World War II to  write the screenplay that gives a stark and non-glorified look at winter warfare and what it brings out in the human psyche. 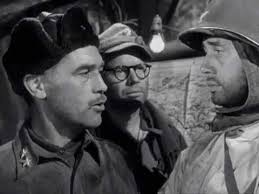 High in the mountains the American advance has ground to a halt and the communist red army has the advantage, so the Major General (Stuart Randall, They Rode West) agrees that they should withdraw. Problem is that there is just one road leading to the bridge and the safety beyond, also as soon as they try to leave the Red army would spot them and be on top of them in no time at all. What is needed is a rearguard action. Take forty eight men and equipment and send them to a pinch-point and make it look like a platoon is still there in force.

Forty eight dejected looking men look on as everybody else files past their on the way to safety, the others just have have the cold, snow and a fierce enemy in front of them.

Sgt. Rock (Gene Evans, Rawhide) is in charge of the men and he leads them up to their strategic pinch point to set up camp. Most of the men gripe about their

intended deployment, amongst them is Cpl. Denno (Richard Basehart, 5 Branded Women) a man who has military training but is not in charge. On the way to their objective they dig in and wait to see what is in the area, soon an enemy scout comes into view and Denno trains his rifle on the enemy, but he can’t pull the trigger, and we hear his inner thoughts. 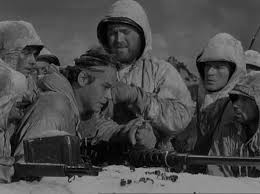 Instead Jonesy (Pat Hogan, Gun Fury) pulls the trigger and kills the scout and moves on, along comes Rock and wrongly congrats Denno on his first kill.

Once they reach their destination they set up camp and build a blockade and set a personnel and anti-tank minefields, whilst Rock regales how the enemy will act if their plan goes well along with his uncanny ability to smell the enemy coming. 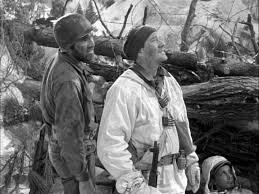 With the enemy probing and taking out some of the forty eight, it soon shows the cracks within the group and when the numbers start to dwindle Denno’s fear of becoming the man who has to give orders start to surface, what will he do to be just a rifleman and will they hold the enemy back long enough for the other 15,000 men to get to safety?

This is a cracking in-depth war film that has you gripped all they way through, a must have for the fans of this genre and with the 4k restoration and all the extras (listed below) this will sit nicely on your Blu-ray shelf.

Sgt. Rock “You’re not aiming at a man, you’re aiming at the enemy. Once you are over the hump, you’re a rifleman” 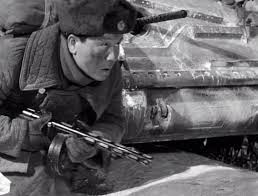 ·         Uncompressed monaural soundtrack on the Blu-ray

·         Gallery of production and publicity photos

·         Optional English subtitles for the deaf and hard-of-hearing

·         PLUS: A booklet featuring a new essay by critic Glenn Kenny and excerpts from Fuller’s autobiography A Third Face