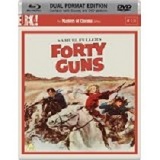 Eureka bring us #116 in their Dual format series of classic films brought up to date.

This is one of Samuel Fuller‘s (Run of the Arrow) thirty three films, an expert at directing and writing. He made this in the heyday of westerns films. Being shot in black and white it gives the action a stark background much like the characters of the film.

Griff Bonnell (Barry Sullivan, Dragoon Wells Massacre) and his two brothers Wes (Gene Barry, The War of the Worlds)and Chico (Robert Dix, Forbidden Planet) are headed for Tombstone, Cochise County, Arizona. A one time gunslinger, Griff now works on the right side of the law as he collects perps for the Attorney General. Griff has a warrant for

the arrest of Howard Swain (Chuck Roberson, Cahill) a member of the Forty Guns, who are Jessica Drummond’s (Barbara Stanwyck, The Lady Eve) “Dragoons” a bunch of hired guns that have the run of the territory and the town of Tombstone. And once Griff and his brothers have washed off the trail dust they confront the rampaging forty. Everybody knows who Griff is just by the way he walks, he has a steady gait and a determined stare, safe in the knowledge that he has the backup of his second gun Wes and the ever hopeful third gun Chico, who is still a wetnose.

The only one that doesn’t know is Brockie Drummond (John Ericson, Bad Day at Black Rock), Jess’s younger brother. He has a fire in his belly, but that doesn’t stop Griff from silencing him. His sister has all the clout in this land and he is soon back at their mansion, minus his irons.

Brockie is a young man who doesn’t take much heed of anyone including his sister. It will lead him into more trouble, which is always good in a western, as tough men try to take each other out, some hold grudges and some have very deep dark secrets (no spoilers). 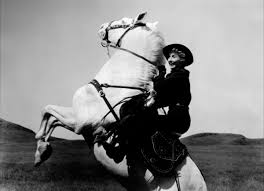 Barbara  Stanwyck plays a mean hard handed woman that has a soft spot for one man, and it’s not the one that loves her, and as always it won’t go well for those concerned. One of the things that separates this film from other Westerns is the inclusion of songs sung by Barney Cashman (Jidge Carroll) “High Ridin’ Woman”, “God Has His Arms Around Me” which are placed at the right points to fit in with the story, as Jess is a legend in Cochise County.

to the power of Samuel Fuller and the mastery of his craft.

A definite requirement for your western collection.