4 stars for this original and genuinely scary horror film. 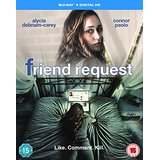 Friend Request is written and directed by Simon Verhoeven (Men in the City 1 and 2) with screenplay by Matthew Ballen and Philip Koch (Outside the Box).

“You know a lot of dead people, Miss Laura.”

Laura (Alycia Debnam-Carey – Into the Storm) is a popular college student, who spends lots of time on social media, especially Facebook, on which she has over 800 friends. 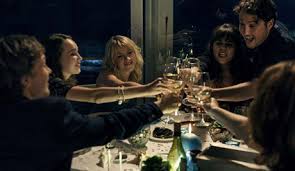 She shares a lovely house with her best friend Olivia (Brit Morgan – She Wants Me, Freeloaders) and has a devoted boyfriend, Tyler (William Moseley – The Chronicles of Narnia), who is training to be a doctor. She also has a number of close friends, Kobe (Connor Paolo – Stake Land, Camp Hell), Gustavo (Sean Marquette – The Goldbergs) and Isabel (Brooke Markham – Dying to Kill).

One day she receives a friend request from a girl named Marina (Liesl Ahlers – The Challenger Disaster) who shares one of her classes. Laura doesn’t know her, but on seeing that Ma Rina, as she calls herself, has no friends, she accepts the request, thinking it is perhaps a new profile.

When they further inspect her timeline, they find it full of disturbing images and illustrations, however they think no more of it. After Marina catches her in a lie that she wasn’t going out to celebrate her birthday, she publicly confronts her at college, causing Laura to unfriend her.

This will prove to be more difficult than she thinks, because as the lecturer gives them the sad news that Marina has committed suicide, recorded the whole thing and posted it online, Laura begins to lose control of her profile, and her relationships, as strange things happen to her friends and family and her friend count starts to fall. 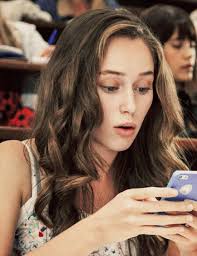 Friend Request is a very enjoyable watch. There are several extremely effective jump scares and the whole concept is quite scary to anyone who uses social media. The horror has all the more impact because it’s based around something as mundane as Facebook, which is now a part of most people’s everyday lives.

The acting is good, the special effects suitably gruesome and if you’re after a decent new horror film to watch then you won’t go far wrong with this one. Well worth adding to your collection.

“I just want to be friends, best friends, forever…”