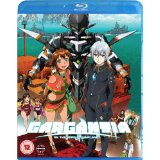 The human race has moved to the stars many generations ago and are now a military race, dedicated to wiping out their mortal enemy the Hideauze, a squid-like race that have massive space bases that the humans are desperately trying to destroy.

16 year old Ledo, an ensign of the Galactic Alliance, is sat inside “Chamber” his AI-automated, humanoid-shaped battle suit as he and his fellow soldiers attempt to destroy a Hideauze super weapon, but it all goes wrong and as they try to retreat Chamber is knocked out of the wormhole generator.

When Ledo wakes he finds out that Chamber has kept him in stasis for the last six months and now he is on board a large ship floating on an endless Sea somewhere in the Universe. 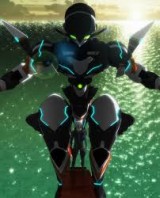 He finds that he is on the flotilla of Gargantia, hundreds of ships of all sizes clamped together all working for the common good. Chamber’s technology is far superior to that of this planet. This intrigues scavenger Pinion who dredged Chamber from the bottom of the Sea. From his cockpit he sees the humanoids resemble him, but there are no military uniforms in sight and they speak an alien language. 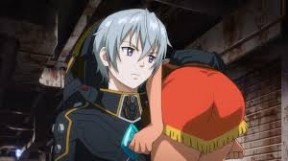 After a disastrous meeting with the female lead Amy, a 15 year old girl who is a flying messenger between the ships of Gargantia, ultimately this aids Chamber in learning the language of this planet and in turn Ledo can learn it.

Ledo learns that Gargantia travels the vast Ocean of the planet that was once home to the human race and that after the start of the 5th Ice age man separated into those that went to the stars and those that stayed.

Now, long after all the ice has melted, humans spend their time scavenging the seabed for advanced technology left behind by their ancestors. This is Pinions and Bellows job, they are fierce rivals with Pinion being the gung-ho one.

With the running of the ship and Ledo’s education running against his military indoctrination that all Hideauze must die, he is in constant battle with his conscience and this leads too a cracking story that keeps you hooked through all 13 episodes and the 2 OVA’s on the three disks.

Battles with Pirates and Giant Squids whilst using a giant robot are great, but it is the battles within the mind that leave the biggest scars.

Another great series to add to your wish list.