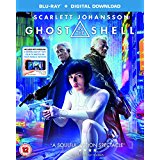 From being thrown in at the deep end in directing Snow White and the Huntsman, Rupert Sanders is back and he is retelling another classic story. This time it’s Shirow Masamune‘s (Appleseed, Dominion Tank Police, Ghost in the Shell: Stand Alone Complex) 1995 classic anime. It is a retelling of the origins of Section 9 the Anti Terrorism Squad. Set in the near future in which robots are common place and humans are integrating the same technology into themselves. 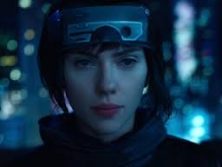 Mira Killian’s (Scarlett Johansson, Avengers Assemble, Lost in Translation) broken body is selected by Hanka Robotics after she and her parents were victims of a terrorist attack in the harbour. She is to be the first of her kind, a melding of a robotic body and her brain rather than using an AI, a ‘Ghost  in a Shell’.

They are successful and her designer Dr Ouelet (Juliette Binoche, Godzilla) is not happy when the CEO of Hanka Cutter (Peter Ferdinando, Lost in London) decides to use the shell in a secret anti-terrorism squad.

A year later, Killian has attained the rank of Major in the anti-terrorist bureau Section 9, working alongside operatives Batou (Pilou Asbæk, Ben-Hur) and Togusa (Chin Han,

The major stands atop a tower block investigating people listening in on something going on the building. They find that Hanka Robotics is having a business conference in one of the suites. Things start to go wrong as the robotic geisha’s are hacked and take hostages as men burst in and start shooting. The Major ignores Aramaki’s order to not go in. She strips off her clothes and goes into camouflage mode and disappears down the outside of the building.

Inside the room o

ne of the geisha’s has taken the Hanka representative hostage and has hacked into him and killed him. Suddenly shots come through the 43rd floor widow taking out geisha’s and terrorists and with a crash the Major come through the window to finish the job. Before she finishes off the last geisha it gives a warning that anyone connected with Hanka will be destroyed.

murdered and all in the name of Kuze (Michael Pitt, I Origins) a mysterious hacker. Dr Ouelet is next on his list to die and Section 9 step into gear and try to find her as two men in a refuse lorry are hacked and they speed through the back streets and slam into the Dr’s car. Luckily she survives but the two are now armed and are about to finish her off when Section 9 turn up and a fire fight ensues. One flees and the Major gives chase, he is hard to spot as he is wearing a camouflage cape making 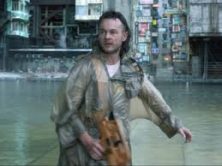 him invisible, but he isn’t smart and stands in shallow water.

He is interrogated back at section 9’s base but he doesn’t know anything as he is given false memories by Kuze who compels him to commit suicide.

Can the Major and Section 9 find and capture the elusive Kuze and can the Major work out why she keeps seeing glitches in her vision?

Ghost in the Shell is a visual treat that introduces the masses to the mind of Shirow Masamune.

Ghost in the Shell is out now on digital download from Monday 24th July.