3.5 stars for this beautiful but highly confused TV series. 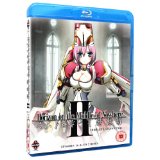 The premise of Horizon is interesting, somewhat reminiscent of “Cities in Flight”. The human race attempts to abandon a devastated Earth, but fails and returns to Earth only to find it uninhabitable everywhere apart from Japan. Japan is conquered by the other countries and subsequently divided into feudal territories, each controlled by a different foreign power. 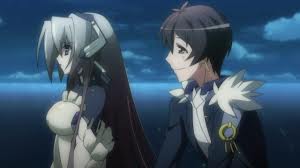 The story revolves around the people on board Musashi, the ship carrying the remnants of the Japanese race. The main focus is on Tori Aoi (who spends most of his time running about naked, censored of course) and Horizon Ariadust, an android with many special powers based around her weapon, the Armour of Deadly Sins.

The various countries must re-enact scenes from history in order to get back to outer space. When Musashi retreats to England to try and negotiate a trade alliance, they find themselves unwittingly caught up in a re-enactment of the 1588 AD invasion of England by the Spanish Armada.

Horizon On The Middle Of Nowhere features a startling array of characters, including Shakespeare, Walter Raleigh, Francis Drake and Galileo, displaying a gleeful enjoyment of other people’s history (albeit in a random and extremely dis-ordered fashion).

The animation style is very pretty to look at, with all the characters having the classic great big eyes and pointed faces and the backgrounds are beautifully drawn. There are some strange aspects, for example, all the female characters, and even the Mechs, have enormous boobs, unfeasably large in fact and coupled with Tori’s love of running around naked, you are forced to wonder occasionally just where they are going with it all.

There is certainly something for everyone here, but I’m not sure that’s necessarily a good thing, there is often way too much going on to follow.

The first series was very popular, so I have no doubt that all the fans of the show will love this just as much, but it’s not my cup of tea. The mind boggles at what delights the third series will have to offer. 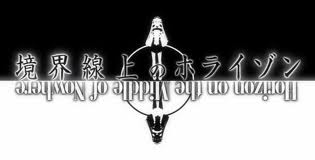