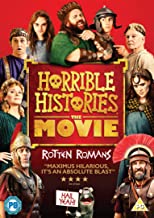 “Anyway, I’ve got  nothing to worry about. My troops will smash Boudicca to pieces.” 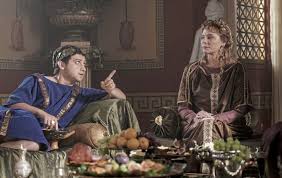 Our story opens in 54 AD with Derek Jacobi (Gladiator, Last Tango in Halifax) hilariously reprising the role of Emperor Claudius, credited with being the Emperor who conquered Britain. The poor hapless Emperor is being poisoned by his treacherous wife Agrippina (Kim Cattrall – Sex and the City), who has designs on the throne. The title passes to her son Nero (Craig Roberts – Submarine, Tolkien) who takes over in five years time when he comes of age. 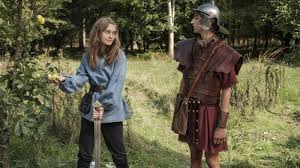 Atti (Sebastian Croft – Game of Thrones, Where is Anne Frank) is a young Roman boy. He is intelligent and quick witted, much to the disappointment of his parents who would much prefer a gladiator or soldier for a son. His entrepreneurial tendencies land him in trouble however, when his latest scheme results in him angering the Emperor Nero at his own birthday party. His punishment is to be made a soldier and sent to Britain, considered by Nero to be a stain on the map.

Meanwhile in Britain, Orla (Emilia Jones – Utopia), the daughter of Celtic chief Arghus (Nick Frost – Asterix and Obelix: The Mansion of the Gods, Paul) is itching to fight against the Romans. She wishes to be a warrior but needs to prove to her father that she is ready. In order to achieve this, she manages to capture a Roman soldier, who just so happens to be Atti. 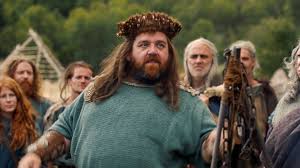 A neighbouring tribe, The Iceni, led by Boudicca (Kate Nash – Glow, Syrup) are up in arms due to an error in judgement by Nero, who has stolen her inheritance. She begins trying to rally the Celtic tribes to go to war, while Atti and Orla attempt to bridge the cultural gaps between them.

Horrible Histories: The Movie – Rotten Romans is a highly entertaining watch, thoroughly enjoyable and packed with disgusting details about  both the Roman and Celt ways of life. It is also an excellent educational tool, presenting historical facts, the events surrounding the Battle of Watling Street, in a way that is both fun and memorable.

There are lots of impromptu musical numbers, plenty of dancing and most importantly lots and lots of jokes, most of them at the expense of the Romans. With a glittering cast and very amusing script I would thoroughly recommend this, something for everyone and well worth a watch regardless of your age.

“To oppose Rome is to die. And thanks to you Attilius, the only Celts left will be dead Celts.”

Horrible Histories: The Movie – Rotten Romans is available to buy now on DVD and Blu-ray.