Who ever said, “Spend money on this and turn it into a Blu-ray” wants Slappin’ and Sackin’.

The Original film was great, but this is a prime example of, “Just because you can” doesn’t mean you should.

Directed by Don Siegel, (Invasion of the Body Snatchers, Escape From Alcatraz, The Shootist and Dirty Harry) that is pedigree. 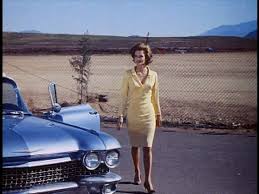 Due to the nature of the filming, this film does not stand up to the conversion, (lots of back projection and original cine film) which makes it stand out against the beautiful looking rework on the actors etc. I think someone had nostalgia for the sylph-like Angie Dickinson, Sheila Farr, (Rio Bravo, Police Woman). 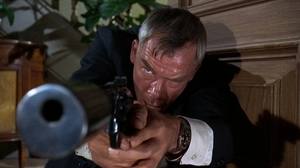 (Clu Gulager, The Virginian) who are terrorising a school for the blind to find the whereabouts of a teacher named Johnny North,(John Cassavetes, Rosemary’s Baby). After slapping around the lady principle, she reveals that he is upstairs, when they have gone she phones upstairs and warns Johnny, but he just tells her, “It’s okay. I know them.”

When they burst into his room they are shocked that he doesn’t make a run for it or try to dissuade them. They fill him full of lead.

Leaving town after their successful job 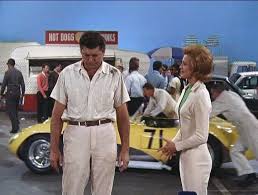 Charlie is annoyed by the turn of events. They mull over the job and the massive amount of money they were paid for this simple job. Four years earlier Johnny had been involved in a robbery where huge amounts of money had gone missing.

With this in mind they decide to investigate further.

This is a great film, but it deserves to be watched “Fuzzy.”

With the acting talents of Ronald Reagan, (Bedtime for Bonzo) and Claude Akins,(Rio Bravo) this is a sure winner. 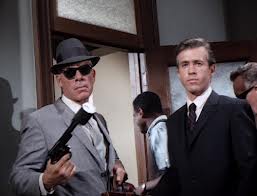