1 star for this long winded and dreary detective series. 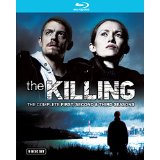 The Killing is based on the Danish series, called Forbrydelsen, one of the original Nordic Noir releases. It was brought to the US by Veena Sud (Cold Case), however, it is written and directed by numerous different people, which isn’t always a good thing, too many fingers in the pie and too many ideas to cram into one TV series.

In anticipation of the Netflix premiere of season 4, seasons 1 – 3 have now been released as both DVD and Blu-ray Box Sets (presumably so that you have to buy another one once season 4 finishes). 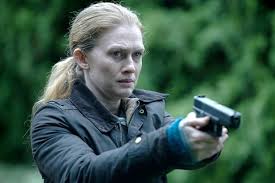 The Killing seasons 1 and 2 focus on the murder inquiry into the death of a teenager named Rosie Larson (Katie Findlay – Tangled, After The Dark). Detective Sarah Linden (Mirielle Enos – World War Z, If I Stay) is on the last day of her job working homicide in Seattle, packing to leave, when her replacement Stephen Holder (Joel Kinnaman – Robocop, Safe House) walks in expecting to take over. 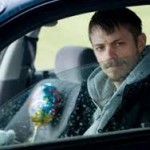 But fate has other plans for them, as they are sent out to investigate a bloody sweater found in a field and open a can of worms the likes of which the world has never seen. Mitch Larson (Michelle Forbes – Battlestar Galactica, True Blood) is waiting at home for her missing daughter, while her husband Stan (Brent Sexton – Life, Flightplan ) is out looking for her. 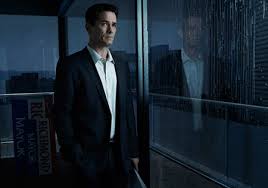 He will never find her, because as Linden and Holder soon discover, her body is in the boot of a submerged vehicle in a nearby lake, a car which is registered with the campaign of the Mayoral candidate Darren Richmond (Billy Campbell – The Rocketeer, Dracula).

The political aspect makes the whole thing far more complicated and combine that with a grieving and angry family, a best friend, Sterling (Kacey Rohl – Sisters and Brothers, Red Riding Hood), who clearly has something to hide, a very suspicious ex-boyfriend, Jasper and his dodgy cohorts and an equally shady teacher,

Bennet Ahmed (Brandon Jay McLaren) this is clearly going to be a very difficult case to solve.

And so it proves to be. Rather than making her planned move to California to get married and settle down with her fiance, she stays in Seattle at the request of her boss to work on the case (I know what my answer would have been!).

Although initially intriguing, it soon becomes apparent that this is a very slow moving piece (as is all Nordic Noir, I suppose), which takes forever to get anywhere. The story is packed full of bizarre twists and turns and there are so many red herrings that your living room will look like a fishmongers by the time you are done. The end result is some sort of bizarre cross between Twin Peaks and 24, which is odd and doesn’t really work. 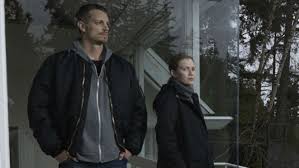 The colour palette is also very depressing, the Seattle tourist board must hate this series, as the sun obviously never shines there. There is never any break from the unrelenting doom and gloom and the whole thing is just a bit tiring to watch. If you do however manage to slog through seasons 1 and 2, you’ll be happy to know that season 3 actually starts a new story!

If you are a fan of the genre and/or suffer from severe depression then this is the series for you. If you’re after a crime thriller, it’s way too slow to hit the mark. 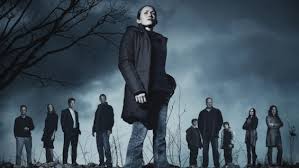 The Killing Season 1 -3 is available to buy now as DVD and Blu-ray Box Sets.