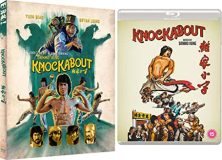 Eureka have landed a big fish with this classic Martial Arts extravaganza, Directed and staring Sammo Hung who is a firm favourite of the Martial arts scene. But it is the main star that steals the show. It is the underrated but absolutely brilliant Yuen Biao (Project A, My Lucky Stars, Millionaires Express) with the best skills I have seen, in all my years. Unbelievable stuff.

Brothers Little John (Yuen Biao, Righting Wrongs, Once Upon a Time in China) and Big John (Ka-Yan Leung, Dreadnaught, The Close Encounters of Vampire) are in town, unfortunately they have no money for food, they have a plan, swindle money out of the local banker.

Little John tells the banker Wei (Chan Lung, Winner Takes All!, 60 Second Assassin) that he has come into an inheritance, of twenty taels, but when the banker weighs the bar it comes in at twenty-eight taels. So he is quite happy to hand over twenty and make a bit of profit for the family bank. With a receipt in his pocket, he heads off to meet his brother with his purloined fortune.

But as usual before they can spend the money that manage to lose all of it. That is due to a rather large beggar (Sammo Kam-Bo Hung, The Millionaires Express, Three Films With Sammo Hung) with very light fingers.

The brothers don’t give up and try a casino scam, which gets them beaten up, their Kung-fu is not strong. With stomachs rumbling, they acquire some fish and to get the rice to go along with it, they try another scam on a guy with silver

hair, he is the Silver Fox (Chia-Yung Liu, Odd Couple, Skinny Tiger and Fatty Dragon) he sees through their scam and they get another beating to make their day. Realizing that they are poor fighters, they beg the Silver Fox to train them in Kung-fu. Reluctantly he agrees, the pair are keen students, especially Little John, whose acrobatics are off the chart.

The Silver Fox trains them to fight as a pair to take on his enemies. But it is their master the brothers must be wary of.

When Little John  finds that he must take on the Silver Fox, who will train him to take down this dangerous man?

When you find out, you will be astounded in what it takes to become a true master of acrobatic Kung-fu. You will not believe the training montage, a montage like no other. Yuen Biao is absolutely amazing in his athleticism, speed and agility. A must buy for eye watering pain that he must have gone through to get this film in the can.