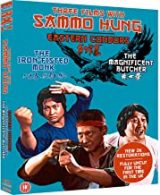 Before the rise of the martial Arts comedy king that is Jackie Chan (Jackie Chan’s Police Story & Police Story 2, Jackie Chan’s PROJECT A & PROJECT A PART II, City Hunter, Wheels on Meals) in the West,  there was a master of the fists and feet that stayed in the East and that was the awesome Sammo Hung (Game of Death, Enter the Fat Dragon, Skinny Tiger and Fatty Dragon). This marvellous release shows ten years of Hung’s work including his directorial debut (The Iron-Fisted Monk).

Iron Fisted Monk sees Hung as Hawker/ Rice Beater Six a young man who was sent to a Shaolin Temple by the Iron Fisted Monk (Chan Sing, Shaolin Vengeance, Return of the Kung Fu Dragon) in a time that the land is run by ruthless Manchu official (Fung Hak-on, Snake in the Eagle’s

Shadow) who has a penchant for raping young women and beating old men to death. Hawker doesn’t have to do all the chores of the monks and spends his time trying to impress his master (James Tien, Fist of Fury). But Hawkers enthusiasm for revenge means that he absconds from the mountain temple but his master catches him and he is forced to take the four tests (You’ll See). Now Hawker is free to deal with the rapist.

(Kwan Tak-hing, Dreadnaught). Unknown to Butcher his younger brother Lam Sai-kwong (Chiang Kam, The Flag of Iron)  is looking for him and he has his new wife Yuet-mei (Tong Ching, Drunken Master) in tow.

and lusts for her. This brings Butcher, his brother and the son of a master all together and as a bonus we have the real drunken master/Beggar King (Mei Sheng Fan, The Buddhist Fist).

The first fifteen minutes of this film are just mesmerising as the two masters test there skills and it carries on throughout the film.

Finally the slightly different Eastern Condors, where a very slimmed down Hung leads a team of Chinese American soldier convicts into Vietnam to blow up a weapons cache left behind by the Americans. Why would they do this, it is not out of the kindness of their hearts but, U.S. citizenship and $200,000 each a real incentive. Once in enemy territory they are met by Cambodian guerrillas led by (Joyce Godenzi, The Raid), they find a small village where they meet Weasel (Biao Yuen, The Avenging Fist) and his demented ‘Uncle’  Yeung Lung (Haing S. Ngor, The Killing Fields).

Now they must take on the Vietnamese military who have a very strange General.

This triple package is a must for any Martial Arts fan and a great way to get into it. Spellbinding.

Three Films With Sammo Hung is available on Blu-ray