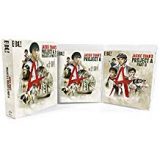 Eureka Classics have out done themselves this time with these two classic Jackie Chan (Police story 1&2, City Hunter, The Lego Ninjago 3D, Kung Fu Yoga, Drunken Master, Police Story: Lockdown), Hong Kong Slapstick Martial Arts films that showcase Chan’s talents at their greatest. With spectacular choreography within the fight scenes especially when Chan teams up with Sammo Kam-Bo Hung (Wheels on Meals, Blade of Fury) and the timing of this pair is stunning to say the least. This package is five star with two films and the amount of special features is staggering making this a must for your Jackie Chan Blu-ray collection.

It is the late 19th century and the British Queen rules Hong Kong on land but not sea as pirates run rife in the surrounding seas making trading difficult and other means of getting trade through have to be implemented (corruption).

standing joke to the rest of the authorities. Sergeant Dragon Ma Yue Lung (Chan) is a member of the navy and he tries his best to stop his shipmates from fighting with the land police, but this is futile as we get our first glimpse of the slapstick martial arts bar fight.

things have to change and everybody is transferred to the police for intense training, to become a special force to go up against Lor Sam Pau (Dick Wei, Godfather’s Daughter Mafia Blues).

In Part 2 the film takes off where the other finished, but this time Dragon Ma is transferred on land to sort out corruption in the police force and revolutionaries. He must do his job with the same kind of gusto as part one.

A great conversion 1080p and with 5.1 sound you can enjoy this action duo at your leisure.