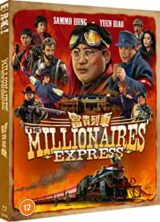 The definitive version (see special features below) of Millionaires Express arrives courtesy of Eureka Classics. From 1986 this action, comedy, western is writer/director/actor Sammo Hung’s homage to the spaghetti westerns of the late 1960s- 70s. You are in for a treat as there is lots of comedy, action and martial arts. Great fun for all the family. And there is more for the connoisseur of the Asian films as there is the Original Cantonese with subtitles, to sink your teeth into.

Kind [GUI DA GUI] (Eureka Classics), Wheels on Meals [Eureka Classics]) comes across what looks like lots of dead Russian soldiers, and being an opportunist, Ching decides to loot the bodies. But it is a training exercise by the Russians, and soon Ching is in

his underpants dancing for the soldiers. Being resourceful, Ching finds a way to escape and run into more trouble in the form of INTERPOL agent Fook Loi (Kenny Bee, ) who has been tracking him. Once  again Ching eludes capture, but we know what kind of man he is, as he heads for his home town of Han Sui.

In Han Sui, Tsao Cheuk Kin (Yuen Biao, Winners & Sinners, Project A, Game of Death) the fire chief has to contend with fires and bandits that want to rob the town’s bank, so when Ching turns up with a load of girls (Olivia Cheng, Rosumand Kwan, Emily Chu) to spruce up his old family Hotel and get some money back into the town, newly appointed security chief Tsao is not pleased to see him and like everyone else wants to see Ching behind bars. But believe it or not Ching just wants the best for the town, and the way he wants to do it is by getting the Millionaires Express train to stop at their town, so the passengers can spend money in his hotel and the town.

But this train  is full of rich people, ninja’s (Yasuaki Kurata, Yukari Oshima, Hwang Jang Lee), and plain down right dirty bandits, oh and throw in a handful of idiots too. Throw in a Hung favourite Richard Ng and you know the comedy element is sorted.

Millionaires Express is a madcap adventure in dust, explosives and Martial Arts. Brilliant fun. You will not find better fight sequences than this.

The Feet and the Fists do all the talking in this Eastern, Western.

The Millionaires Express is available on Blu-ray Limited Edition