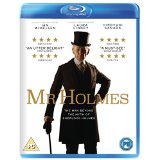 Far away from the tales of old, of the daring do and deductions of the Watson and Holmes collaboration days.

It is now 1947, Watson has left Holmes (McKellen) and got married and Holmes now resides at the idyllic rural cottage near the coast in Sussex. He is now a bee keeper and an author on the subject of bees.

His home is looked after by his new housekeeper Mrs Munro (Laura Linney, The Fifth Estate) a woman that struggles with Holmes deteriorating mental health. Holmes has been using Royal Jelly to stave off the effects of age.

Holmes has been away in Japan after a getting a letter from a fan Mr Umezaki (Hiroyuki Sanada, 47 Ronnin) telling him about Prickly Ash, a substance superior to the Royal Jelly.

Whilst he was away in Hiroshima collecting Prickly Ash, Mrs Munro’s young son Roger (Milo Parker, Robot Overlords) breaks into Holmes’ bedroom and reads the manuscript that he has been trying to write but he cannot recall all the details of his last case.

Roger is a bright and deductive boy who aspires to be like Holmes rather than his working class mother and his dead father. He is always correcting his mother about grammar and the facts of everyday life. Roger encourages Holmes to finish his last case without the embellishments of Dr Watson, “The Adventure of the Dove Grey Glove”. 30 years prior, Mr Thomas Kelmot (Patrick Kennedy, War Horse) comes to him about his wife Ann (Hattie Morahan, The Bank Job) who has a melancholic demeanour and Thomas believes she has been systematically lying to him about where she spends her time after she broke down after two miscarriages even going as far to name them and trying to get headstones for them.

As Holmes’ memory recalls snippets of the story he writes them down and lets Roger read them, as Holmes teaches all about bee keeping. Whilst Rogers mother makes plans for the pair of them to move to a Hotel in Portsmouth where they both can work. But Roger sees this as dumbing down his talents and doesn’t want to go.

Will Holmes solve his last case before he loses his memory and will Roger become his protégé?

A Brilliant performance by McKellen and Parker, a story far removed from his previous cases told by Dr Watson. The perfect afternoon film.

A Glass, A Bee and Roger.