5 stars for this fantastic, outrageous and fun-loving anime romp. 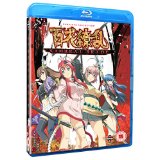 From fan service experts studio ARMS (Aesthetica of a Rogue Hero, Master of Martial Hearts) Samurai Bride is the much anticipated and long awaited sequel to Samurai Girls.

After managing to defeat the nefarious Amakusa Shirō, Muneakira Yagyu might well have expected a little time off. However, he returns from a training mission to find to his consternation that the Yagyu family dojo has been converted into a maid cafe, called True Shadow. 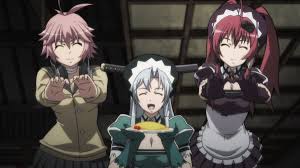 Muneakira is the General of this particular dojo, and has personally kissed each of his Master Samurai (all female and worryingly one of them is his sister) to awaken their latent powers. Now however he finds them all cavorting around as maids in order to bring in enough money to keep the dojo afloat, as it turns out that saving Japan does not pay nearly as well as one might expect. 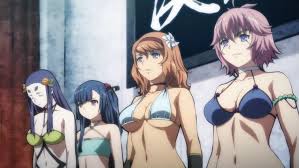 Understandably unhappy with this situation, he eventually begins to come around as the money starts to come in. But their new customers are not as innocent as they seem. They are Dark Samurai, led by Musashi, resurrected for some unknown but no doubt evil purpose, hell bent on fighting Jubei Yagyu, the Master Samurai who took down Amakusa. However, her powers are gone, so they agree one month’s grace for her to regain them. 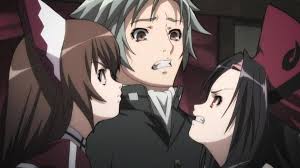 The dark Samurai are far too strong for the Yagyu dojo, so they begin to make plans to attempt to create a Samurai Bride, a Master Samurai of unrivalled power, however, only one is allowed per General, and no one’s really sure how to make it happen. It’s important that they work it out, as a curse has been placed on Muneakira which will render him incapable of using his sword, and eventually remove his powers as a General.

There is plenty of rivalry among all the ladies involved. Matabei, Hanzo and Kanetsugu are yet to be made Master Samurai and with the arrival of Yuki’s monkey, Sasuke and Muneakira and Jubei’s sister Gisen, things are about to get a whole lot more complicated. 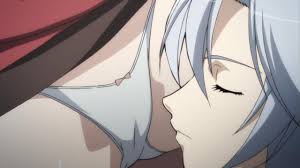 Although the story sounds quite serious, there is precious little serious about the presentation of it. There are very few clothes in evidence, acres of naked flesh and abundant bathing scenes, all featuring bouncing breasts and jiggling butt cheeks. There is also plenty of panty sniffing and underwear reorganising, and it’s highly unlikely that there is a man alive that won’t appreciate the short films included on the disc.

Samurai Bride is very funny, well written, beautifully animated and thoroughly enjoyable from start to finish. This one comes highly recommended, well worth adding to your collection.

“That’s not my sword! I can get a grip on that without your help, thankyou!” 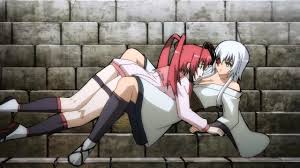 Samurai Bride is available to buy now on DVD and Blu-ray.