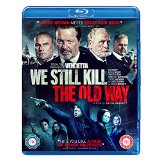 From the people that made Vendetta comes another brilliant revenge film.

Writer/Director Sacha Bennett (Bonded by Blood) brings us a hard hitting, brutal story of the East End of London, where the old firm take back the streets, with that blend of deadpan humour that only the British can deliver.

Richie (Ian Ogilvy, Driving Aphrodite) is living the easy life in sunny Spain whilst his brother Charlie (Steven Berkoff, The Girl with the Dragon Tattoo) has lived his whole life in the same streets that him and his brother used to run. 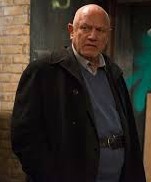 But life has moved on in the 20 years Richie has been away, the streets are now run by the collective known as E2.

boozer, whilst local scrote and leader of E2 Aaron (Danny-Boy Hatchard, Eastenders) shares his alleged girlfriend Lauren (Danni Dyer, Vendetta) with the rest of his crew.

After a phone call from his brother inviting him over to Spain, he follows his brothers instructions and he decides to head off home, but as he heads down the street he hears a commotion and investigates, he find all the E2 taking turns on Lauren as the others film it all on their phones except Dean (Nathan Clarke, Harry Potter and the Order of the Phoenix) who doesn’t like the way Aaron treats the girl he has a big crush on.

on one-on-one, but that’s not how E2 roll and they all descend upon the pensioner kicking him whilst he is down and with Aaron loosing his rag he delivers the killing blows. They leave him to die as they nonchalantly wander off down the street bumping into Lizzie who then discovers Charlie’s body. She has the hard job of phoning Ritchie.

Richie arrives at a heliport and is met by Roy (Christopher Ellison, Buster) one his and his brother old crew. At the funeral there aren’t many people but those who turn up are Butch (Tony Denham, The Football Factory) and Arthur (James Cosmo, Game of Thrones) and afterwards at the wake so does DI Taylor (Alison Doody, Indiana Jones and the Last Crusade) warning him that she does not want any vigilante style justice and with a rye smile Richie says that there will not be any… He makes use of old contacts and manages to get files on

two of the E2 gang and his brothers knuckleduster.

But we all know that we are in for some old style street justice and with Lizzie living in fear she is all up for the old days when it was safe to walk the streets.

With a welcome return to the big screen for Ogilvy who delivers that certain charm and full of foreboding of a man who always keeps his word.

The violence is Violent and the humour is laugh out loud funny. Brilliant performances from all involved.

Highly recommended for those that like there films hard hitting.

Available to Order on DVD and Blu-ray Now.