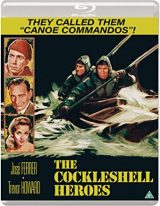 Actor/director José Ferrer (The Great Man) brings us one of Great Britain’s most audacious and daring raids on occupied France during the second World War. Now Eureka has added this marvellous slice of cinematic history to its Classics range, with full 1080p restoration (see below).

Portsmouth 1942, when Germany has occupied France and their ships are slipping through the Allied blockade to fuel the German war machine. Captain Hugh Thompson (Trevor Howard, The Third

Man, Brief Encounter, Superman) awaits his new mayor to start a mission to stop these ships going to Bordeaux, by scuttling ships in the docks, rendering it useless to the Germans.

Should be good chaps.

The man charged with bringing this about is Major Geoffrey Stringer (José Ferrer) an unconventional man who hasn’t risen through the ranks and he has been handed this commission, much to  the annoyance of Thompson. Stringer plans

With a rag-tag bunch of volunteers, it is up to Marine Sgt. Craig (Victor Maddern, The Siege of Pinchgut, I’m All Right Jack) to lick them into shape, before Stringer takes control with his unconventional methods.

I’m looking for a special sort of man.

An individualist, one who can think for himself.

A man who’ll do the job for its own sake,

rather than because a sergeant shouts at him.

Eventually the men are whittled down to just eight men and this is the crew that must be trained to carry out the mission. They are Marine Clarke (Anthony Newley, Oliver Twist), Marine Ruddock (David Lodge, The 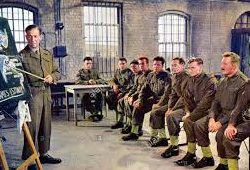 Stringer and his men have to deal with a lot either in the barracks or their home life to get this mission done.

Watch how it was done back in WWII when suicide missions had to be tried.

Bonus appearances by Dora Bryan (The Great St. Trinian’s Train Robbery) as Myrtle and Christopher Lee (Star Wars: Episode II – Attack of the Clones, The Lord of the Rings: The Two Towers) as Commander Dick Raikes.

This release is a must for the war, action fan.

The Cockleshell Heroes is available on Blu-ray.