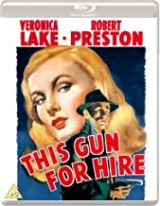 A Man With Nothing to Lose and a Dame.

Eureka Classics brings us a true film-noir with the stunning Veronica Lake and the hard-nosed Alan Ladd. Adapted from a Graham Greene novel (The Fugitive, Brighton Rock, Our Man in Havana) and directed by Frank Tuttle (Springtime for Henry, The Hour Before the Dawn)  , who brings us a propaganda film to keep the American WWII civilians alert to the dangers of internal traitors to the war cause, and he does it superbly.

The Marchbank Hotel in San Francisco Cal. is the temporary home to Philip Raven (Alan Ladd, The Glass Key, The Blue Dahlia, Shane, Quantrill’s Raiders), a man who will

kill you at the drop of a hat, never mind if there is money involved. That is why he is sharing his room with a stray cat which annoys house-maid Annie (Pamela Blake, Pamela Blake, The Case of the Baby Sitter). It earns her a smack in the jaw and a torn dress, as Raven goes about his business.

Which is to do his clients bidding in finding Albert Baker (Frank Ferguson, They Won’t Believe Me, Thunder in God’s Country) a chemist with profit on his mind. But Raven’s client doesn’t like being blackmailed and Raven does what is required with Baker and his female companion. He acquires a formula for the mass production of a deadly gas.

Raven’s client, a Mr Johnson (a Willard Gates (Laird Cregar, The Black Swan, Heaven Can Wait)) is pleased with the outcome of Raven’s work and says that his client pays well and hands over a very fat envelope of $10 notes. But Mr Ga

tes is a very slippery character, as after he pays Raven off, he rushes straight to the office of Detective Lieutenant Michael Crane (Robert Preston, Blood on the Moon, The Last Starfighter) and spins a tale of his company’s Nitro Chemical Corporation of Los Angeles being robbed of their $20,000 payroll, and it can be traced by the consecutive numbers on the $10 bills and Nitro are offering a massive $5,000 reward.

Thinking his problems are over Gates goes to see an audition for his other pastime the Neptune club in LA, he is there to see Ellen Graham (Veronica Lake, I Married a Witch, Sullivan’s Travels, The Hour Before the Dawn) a singing magician and the girlfriend of Michael Crane. Ellen is hired and is asked to take the stage in LA where she will also have a mission to undertake.

Flush with money Raven feels a duty, and he pays for an $8 dress for Annie. This is where his troubles start for the cashier recognizes that the note is one from the robbery. She alerts the police and soon Michael is on the scene at the Marchbank looking for the man with severely deformed left wrist.

This Gun For Hire is a true Film-Noir and if you know what that is, you are in for a treat and if you don’t there isn’t a better way to get into this niche film genre. Raven is on the hunt for Gates and whoever employed him as Crane chases his tail and Ellen entertains a Senator.