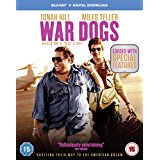 After a short break director Todd Phillips (Hangover (Trilogy)) is back with a bang. He gives us a story based in real life US of A during the war in Iraq, but this tale definitely has its tongue firmly wedged in its cheek. 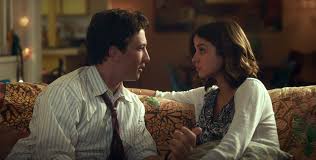 January 1st 2008 a car pulls up in an abandoned yard, there is the sound of breathing as a man is pulled from the boot of the car. But that was 2008, go back to 2005 and we find David Packouz (Miles Teller, Divergent) living and working in Miami, Florida as a massage therapist.

He doesn’t enjoy his job and he dreams of selling top quality Egyptian cotton sheets to the myriad of elderly retirement homes, but so far this isn’t working and his house that he shares with his girlfriend Iz (Ana de Armas, Hands of Stone) is full of boxes containing the sheets. 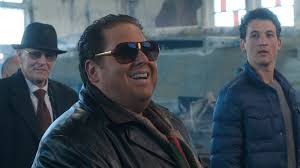 At a funeral David sees his childhood friend Efraim Diveroli (Jonah Hill, Forgetting Sarah Marshall) that had moved away to sell guns with his uncle. These two used to get up to some dodgy things and it was better that they were apart, but they are adults now so who is going to stop them getting into more mischief?

Efraim is now back in Miami and has set up his own business AEY, still selling guns but now he does it to the American military due to a little known loop hole that allows anybody to bid for military contracts. David and Iz are vehemently opposed to the war in Iraq but when Iz realizes that she is pregnant David has to find a way to raise more capitol and when Efraim offers him a job at AEY he accepts and throws himself into the art of being a war dog.

They do well and earn good money while David keeps it a secret from Iz, all goes well’ish until they land that one contract that would set them up for life.

“Everyone’s fighting over the same pie and ignoring the crumbs. I live off crumbs.” 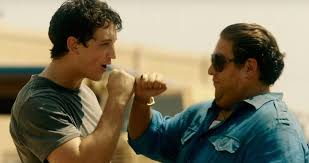