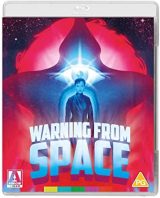 What More Could You Want?

From a time before space rockets and when imagination was your only tool, sci-fi came to life, and Warning From Space employs this along with Japan’s unique trait of being the only people to know what it is like to go through a nuclear blast. Penned by Gentaro Nakajima and directed by Kôji Shima (Cascading White Threads, The Story of a Blind Woman) who brings us UFOs, alien Aliens and a fantastic story of impending doom  for the Planet Earth.

Strange things have been appearing over the night skies of Tokyo, bright lights flying high above the Earth and scientists are baffled to what they are. As journalist Hideno (Toshiyuki Obara, Tokyo Ninja Force) awaits Dr Komura (Bontarô Miake, Satan’s Sword, Tora! Tora! Tora!) from the observatory for the latest on the scoop, he has to be content with ‘nothing yet’.

Later on when Dr Komura heads home there is a call for him at the Cosmos Cafe. It’s Professor Isobe (Shôzô Nanbu, The Haunted Castle) who spots an object in his telescope, apparently releasing smaller objects. Soon a weird sound is heard overhead and suddenly all the radios in the area go haywire. Also, something lands in Tokyo bay.

Soon there are screams and shouts from different areas of the bay, something strange is being spotted observing the humans as they work and play. When investigated all that is found are strange blue flames, but with no heat. Humans and Aliens have a dilemma, how to communicate with each other. The observatory is still watching the comings and goings of the strange lights over Tokyo.

There is trouble in store for the Earthlings, but where is it coming from?

Warning From Space is a unique Sci-Fi in that it was made before the first satellite was launched, and they are the only people to know the power of a nuclear bomb directly and want to use them for the good of the human race.

A must-have opportunity to own this great Sci-Fi classic.

Warning From Space is available on Blu-ray