Introducing Takashi Miike‘s (Ichi the Killer, 13 Assassins, Detective Story) Yakuza Apocalypse, a story of loyalty and revenge in the inimitable Miike style of blood, controversy and amazing fight scenes intermingled with the gore of horror.

Yakuza boss Genyo Kamiura (Lily Frankie, Lovers) runs his town with an iron fist as he protects his citizens from outsiders and even though they have to pay for their protection they all respect and love him.

Even though the town is in recession he helps out the citizens with donations to help the shop keepers. but he hides a dark secret, he is a powerful vampire but he keeps strict rules on himself, no citizens.

At his local drinking hole the barman keeps a cellar full of the enemy yakuza, who are on a reforming program consisting of knitting. These are Kamiura’s bread and butter when he is feeling down but when seriously injured only innocent blood will do.

Kamiura has a protege, the young ambitious Kagayama (Hayato Ichihara, Rainbow Song) who has the bosses back, the the other yakuza’s don’t see it that way as he doesn’t have the tattoo and won’t as his skin is too sensitive. But this doesn’t bother him.

Amongst all the infighting and sorting out other gangs, the European Syndicate are after getting Kamiura to rejoin their ranks or face the consequences. They

send a cleric with a coffin back pack and a long haired guy with scrolls in a back pack, this guy is the syndicates top fighter Kyoken (Yayan Ruhian, The Raid, The Raid 2). Kyoken starts a titanic fight with Kamiura that sees the the yakuza boss getting a serious beating as Kagayama races to get to his bosses side, but whilst downed the cleric takes the opportunity to open his backpack 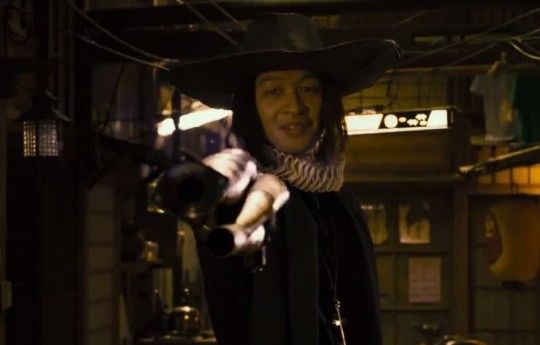 and pulls a custom weapon (Like something out of Fallout 4) from it and fires it at the boss. disabling him and Kyoken takes the opportunity to dispatch the boss.

Kagayama discovers what he thinks is the remains of his boss, but no, the boss has one last request and it comes as a shock. Now there will have to be revenge as the big guns come out and the syndicate send their best to face the new Kagayama.

A great film for the genre fans and great fun for those looking for something different. The fights are great with the essence of the Old Boy hammer fight, and miniature Silent Hill baddies. The gore of any good horror film and the goofiness of any Japanese anime.

I wasn’t expecting to see a seven foot frog with a baseball bat today.