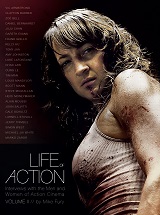 Life of Action II is the second book from Mike Fury ( Life of Action) documenting the behind the scenes activity which goes into the making of action in film and T.V.

This second book features a brand new collection of  in-depth interviews with those in the know, actors, stunt men and women, directors, second unit directors, representing those both behind and in front of the cameras.

There are interviews with many big names from the industry, including Vic Armstrong, stunt double for Harrison Ford in Indiana Jones I and II and other films, stunt double and co-ordinator for Christopher Reeve in Superman I and II, and director on Joshua Tree with Dolph Lundgren, among many other achievements.

Also featured is Zoe Bell, who started her career doubling for Lucy Lawless in Xena:Warrior Princess and went on to become one of the top stunt women in the world, doubliong for Uma Thurman in Kill Bill, working on other Tarantino projects and ultimately becoming an action star in her own right in Raze and Camino.

This is a fascinating read for anyone interested in the action genre, packed with insightful questions and well thought out responses and clearly a lot of research has gone into the writing of this book. It is inspirational, with it’s overwhelming message that the only way to succeed in this industry is sheer determination, persistence and hard graft.

An excellent read and a must own for action fans everywhere.

Life of Action II is available to buy now in hardcover, paperback, and Amazon Kindle.