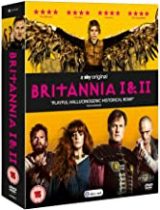 Created by writers Jez Butterworth, Tom Butterworth, James Richardson they bring us a mystical (not historically accurate) tale of the second Roman invasion of Britannia in AD 43. A time when there are warrior tribes that war and are controlled by the Druids doing the work of the Gods. Will the tribes bow down before the mighty Roman Empire or will there be bloodshed?

The invasion is headed by celebrated General Aulus (David Morrissey, Welcome to the Punch, The Ones Below, Good Omens) who has fought and won many countries for the Empire. When he arrives on Britannia’s shores he quickly shows the locals what happens if you do not fall beneath the Roman heel of taxes and citizenship.

Once a beachhead is established, Aulus sends out envoys to the local tribes to parley, which are the Cantii with King Pellenor (Ian McDiarmid, Star Wars: Episode V – The Empire Strikes Back) and the Ragni with Queen Antedia (Zoë Wanamaker, My Week with Marilyn, Harry Potter and the Philosopher’s Stone) at their head and she likes the Romans if they can help rid her of the Cantii.

Aulus hears about the Druids and wants to learn more and when he meets Velan (Mackenzie Crook, Sex Lives of the Potato Men, Pirates of the Caribbean: Dead Man’s Chest, Pirates of the Caribbean: At World’s End, Game of Thrones) ‘the second man’ a man who is reputedly 10,000 years old. This encounter changes as Aulus becomes aware of Velan’s prophecy and the presence of Lokka, Pwykka his life is changed and he is reborn.

the gods have ordained, especially of those of the Cantii clan and the young girl (Eleanor Worthington-Cox, Maleficent, The Enfield Haunting) who is dogged by the outcast druid Divis (Nikolaj Lie Kaas, Department Q: The Keeper of Lost Causes, Department Q: A Conspiracy of Faith) who must train the girl with no name to push the Romans back into the sea whence they came. 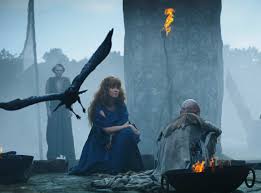 Britannia is full of mysticism, spirits and Romans, it has gory bits and lots of swearing as well as plenty of laugh out loud moments as the characters get to know each other. But it is Mackenzie Crook and David Morrissey that really steal the show, although I think Mackenzie had a harder time of filming.

Britannia is set in the beautiful landscapes of Wales and the Czech Republic and a cracking sound track from Donovan (The Hurdy Gurdy Man) to The Stranglers (Something better Change). All in all a cracking series that keeps giving.

Will the prophecy be fulfilled? 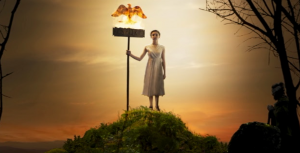 Britannia is available on DVD.