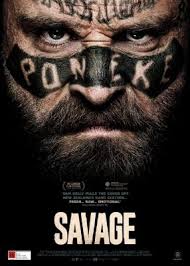 Savage is writer/director Sam Kelly’s first feature film and he brings the powerful story of a man’s life on the fringe of society. He has written a well crafted and at points very touching and moving tale set in amongst the violence of biker gangs, in the suburbs of Wellington NZ.

First set in 1989 we see the tattooed face of ‘Damage’ (Danny) (Jake Ryan, Colourblind, Out of the Shadows, Home and Away (TV Series)) as he is the enforcer for Moses’ (John Tui, Battleship, The Hobbit: The Battle of the Five Armies, Solo: A Star Wars Story) Savage gang. At the clubhouse Bab’s (Taofi Mose-Tuiloma, Gary of the Pacific) has brought the girls over for the guys entertainment. With her is Flo (Chelsie Preston Crayford, Home by Christmas, Beyond the Known World) who Danny takes a shine to. But his gruff demeanour is not to her liking.

Why do you wear that mask?

So you can see who I am.

But even when you’re supposed to be letting your hair down, there is always someone who wants to cause trouble and in the Savages that trouble is Tug (Alex Raivaru) who wants what Moses has, the Presidency.

But Danny’s story started when he was a young lad (Olly Presling, Pete’s Dragon) where he shared the house with his long-suffering mother, his five siblings and his abusive father. Things are tight and he’ll give you a beating for mentioning that there is no meat in their diet. So what does a young boy do? He breaks into a store and steals food, but he is caught and the family don’t want the shame so Danny is sent off to borstal. There he meets another inmate Moses (Lotima Pome’e, The Legend of Baron To’a) with whom he bonds after a series of events.

Your face is disgusting. 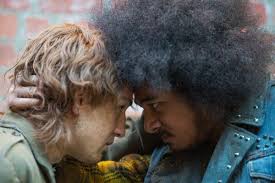 We move onto 1972 and Danny is stealing a car to go visit the homestead, but he makes sure nobody spots him. Meanwhile, Moses and the guys are at the train station when they spot a biker gang and how everybody gets out of their way, and from then on the ‘Savages’ are born.

Danny’s story is a Savage one, where loyalty will be tested and asked for at many a situation, but when it comes down to it, a man is always a little boy when he stands before his mother.

Savage is a well-balanced story between the day-to-day life of a gang member and the yearnings of belonging to a family, whether it be of blood or by bonding. A great exponent of its genre and a brilliant way to start a directing career.

You have pretty eyes.

Savage will be in Cinemas on the 11th of September.