4 star journey from tacos to chopsticks. 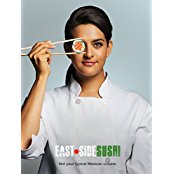 East Side Sushi is written and directed by Anthony Lucero and is his very impressive feature film directorial debut.

“A good sushi chef can pick up his knife and go anywhere he chooses, like a samurai warrior.”

This heartwarming film tells us the story of Juana Martinez (Diana Elizabeth Torres – Private Number), a young Mexican woman making ends meet by running a fruit stall with her father, Apa (Rodrigo Duarte Clark) during the day and cleaning in a gym by night, as well as trying to juggle looking after her daughter Lydia (Kaya Jade Aguirre) .

One day, while walking home she spots a notice in the window of a Japanese restaurant, Osaka, saying help wanted. After being attacked while operating the fruit stall, she realises it’s not worth the risks and decides to apply for the job.

The owner Mrs. Yoshida (Miyoko Sakatani) is reticent, but Juana has the required kitchen experience and has worked in many Mexican restaurants so she agrees to give her a try. After seeing her knife skills, head Sushi Chef Aki (Yutaka Takeuchi – True Blood, USS Indianapolis: Men of Courage) is quick to take her under his wing and begin showing her the ropes.

There are obviously glaring cultural differences, but Juana sets her heart on moving out of the Kitchen and becoming a Sushi Chef and Aki tries to help as best he can. She practices at home on her highly sceptical family, but will she be able to overcome all the prejudice and make her dream come true?

East Side Sushi is a very enjoyable film. Watching the collision of cultures as they are all introduced to completely alien food and attempting to bring together Mexican and Japanese makes for a great watch. The acting is very good for such a relatively inexperienced cast and this is a very impressive debut from director Anthony Lucero.

This is a good story of determination winning out against all the odds and although I doubt the sushi made is 100% authentic, it really doesn’t matter, it’s all about the relationships and personal development.

Well worth adding to your collection, grab some sushi and some tacos and kick back in from of your TV.

“We do not speak when we are working, because we do not want to spit in the food.”