3 stars of colourful and lighthearted fun for children. 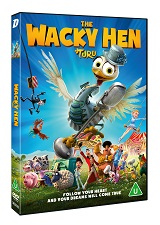 The Wacky Hen is a Spanish film, originally called La Gallina Turuleca and directed by Eduardo Gondell and Víctor Monigote. It is presented here with an English dub courtesy of Dazzler Media.

“Not you. Back in your corner. You haven’t laid a single egg yet and you’re an eyesore.”

Mr. Cocorico (Blair Holmes) is a chicken farmer who travels to a small local town with his collection of prized egg laying hens. 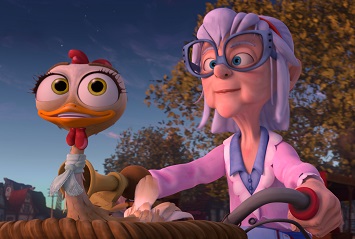 Only one of his hens is unproductive, a funny looking little thing called Turuleca (Elisabeth Grey). His luck is in however when unsuspecting little old lady Isabel (Roxanne Bachmann) comes to his stall.

She happily takes Turuleca home and awaits her eggs, but alas none are forthcoming as Turuleca cannot lay. She does soon discover she has another talent however, she can talk! 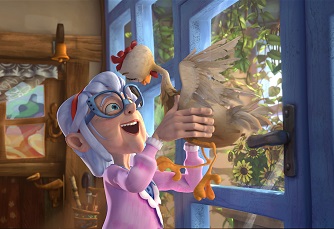 She becomes a beloved part of the farmyard and fits right in with the other animals until one day disaster strikes and Isabel falls from the roof during an ill advised impromptu dance routine and is taken away to hospital in the big city suffering from amnesia.

Turuleca vows to find her and joins forces with a struggling travelling circus run by Antonio (Thomas Shutter). She becomes the star turn, singing while being accompanied by Matthew (Tomas Ayuso), the son of Antonio.

Constantly threatening them is the evil Mr. Troubley (Stephen Hughes) hellbent on destroying the circus at any cost. Can they save the circus and track down Isabel.

The Wacky Hen is a very strange story, however it is simple, colourful and with some annoyingly catchy songs to have your little ones singing along and you reluctantly humming for days. 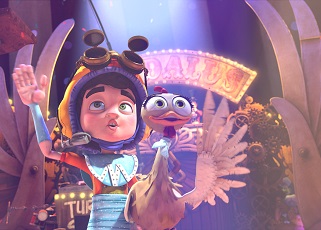 The script is very stilted, as is the voice acting and some of the ideas are strange, not sure a love interest is necessary in a children’s film, although Vincent is magnificent. All in all though, this film will certainly appeal to youngsters and will probably be watched over and over again and that is really all it is designed to do.

A great way to keep your little ones entertained during this lockdown.

“Dance to the rhythm and the beat of Turuleca, heyyy Turaleca.”